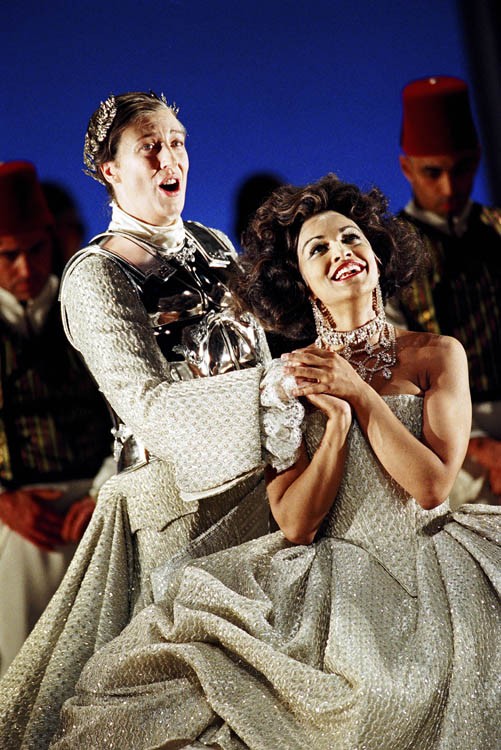 Giulio Cesare in Egitto is one of Handel's greatest operas and hence one of the all-time greats! It deals with the complex inter-relationships, personal, political and sexual, of the eight main characters. It therefore requires a cast of eight equally matched great singers. It has a double plot: it tells, on one hand, of the attempts of Cleopatra to seduce Caesar to help her in her power struggle with her brother, Tolomeo, (a comedic element) and, on the other, (a tragic element) the quest for revenge by Pompey's widow, Cornelia and their son, Sesto, for the gruesome murder at the start of the opera. The challenge for the director is to get these two interacting elements in balance; there is little scope for extraneous intervention.

This year's Glyndebourne production, directed by David McVicar, conducted by William Christie has to stand comparison with a near-perfect interpretation seen at the Kennedy Centre, Washington, in 2000, under the musical direction and influence of Will Crutchfield (a conductor who seems little known in Europe). That performance received a well-merited spontaneous standing ovation at the end.

At Glyndebourne the curtain rises on an authentic baroque stage set with rolling waves in the harbour in the rear. However, instead of being populated with soldiers in Roman armour, they are dressed in red tunics of a modern colonial era, carrying firearms. The only apparent reason for this change of century is that it enables Cleopatra, in her seduction scene, to be presented as a cabaret coquette; likewise the cavorting of the Egyptian court is presented in the form of a night-club dance routine. Danielle de Niese (Cleopatra) gave a stupendous performance, immensely popular with at least half the audience. However it did distort the balance of the production, preventing a proper synthesis with the tragic element beautifully depicted in the mother-son relationship of Cornelia (Patricia Bardon) and Sesto (Angelika Kirchschlager), she, proud of her son's thirst for vengeance yet fearful of his fate. Their heart-rending duets at the end of Parts I and II were the supreme musical moments of the evening. Christopher Maltman gave an excellent performance as the duplicitous Acchilla. But, to me, the great disappointment of the evening was Sarah Connolly as Caesar. Although she gave a deeply felt musical interpretation of the role, it was not suited to her voice. (It was originally written for alto castrato. Authenticity has yet to go that far!) Dramatically, she lacked the stage presence of the other principals which led to a lack of balance in some of her scenes.

William Christie conducted the Orchestra of the Age of Enlightenment. This ensemble has a timbre different to his own Arts Florissants. It is a much larger group than the Symphony of Harmony and Invention and with, to my ears, a far more balanced tone. For me it wins the accolade for the most authentic sound for the accompaniment of Handel Opera.