The Christmas Vacation was celebrated by three seasonal operatic visits, one to the Royal Opera House and two to the Phoenix Picturehouse live from the New York Metropolitan. The first and third of these were to see Richard Strauss’ great comedy Der Rosenkavalier, experiences which will be compared and contrasted in Second Week (the Met version not yet transmitted at the time of writing). The second was Jacques Offenbach’s last operatic masterpiece Les Contes d’Hoffmann, the subject of this review. 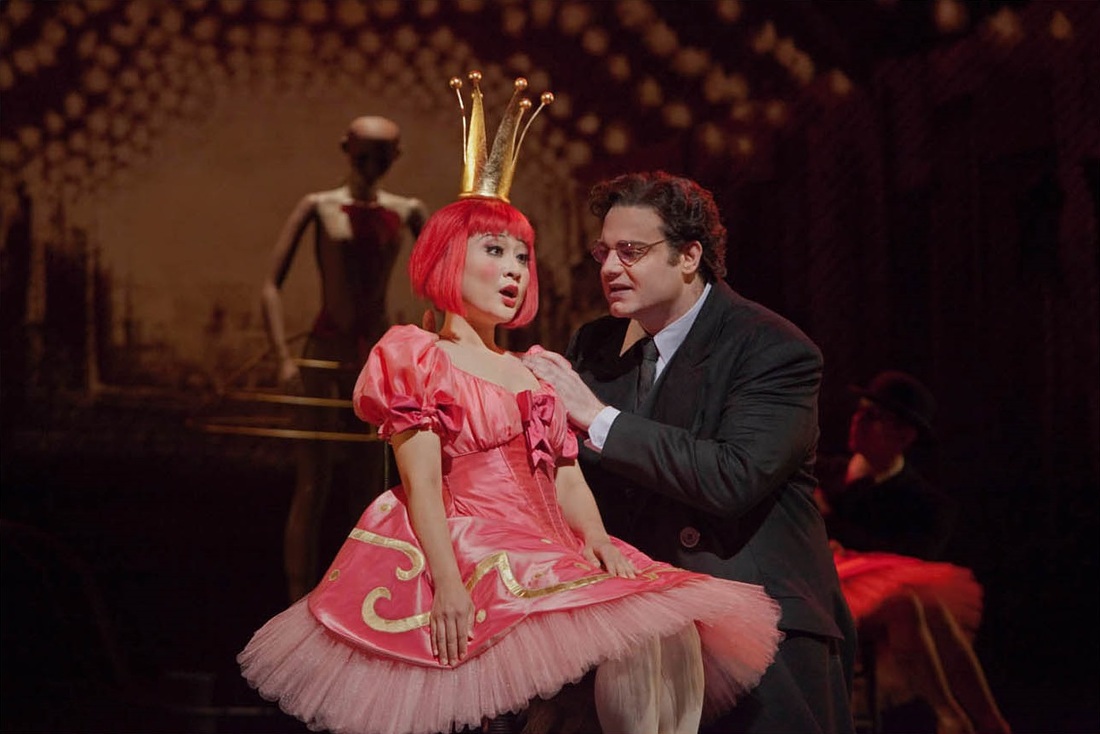 Kathleen Kim as Olympia and Joseph Calleja as Hoffmann in Act I of Offenbach’s “Les Contes d’Hoffmann”
Photo: Ken Howard/Metropolitan Opera
In Les Contes d’Hoffmann, the poet Hoffmann recounts in flashback, while awaiting the end of an opera in which his current girlfriend Stella is performing and for the benefit of an audience at Luther’s tavern, the stories of three past loves real or imagined, all thwarted by an evil genius, who has his latest personification in Councillor Lindorf who walks off with Stella at the end leaving Hoffmann in a drunken stupor.

The three contes are of the doll, Olympia, mistaken for flesh and blood by Hoffmann seeing her through rose-tinted spectacles sold him by the villain in the form of Dr Coppélius who makes the doll’s eyes, of the invalid would-be singer Antonia, persuaded to sing herself to death by the quack Dr Miracle and of the Venetian courtesan Giulietta, bribed to steal Hoffmann’s reflection by the sinister Dapertutto. Hoffmann has a young sardonic companion/muse Nicklausse; other characters have their equivalents in each tale.

Many of those of older generation will have first encountered the opera memorably in the abridged film adaptation of 1951. Brought to the screen mainly in the form of ballet to pre-recorded music conducted by Sir Thomas Beecham, sung by the likes of Dorothy Bond (Olympia), Margherita Grandi (Giulietta), Monica Sinclair (Nicklaus - sic) Murray Dickie and Owen Brannigan with only Ann Ayars (Antonia) and Robert Rounseville (Hoffmann) also appearing on screen. The filmed roles include Moira Shearer as Stella/Olympia, with Ludmilla Tchérina (Guiletta) and Pamela Brown (Nicklaus) - each heart-throbs of the time in their own way - and, in the male roles, Robert Helpmann playing the four baddies, Léonide Massine and Frederick Ashton. The film was produced and directed by Michael Powell and Emeric Pressburger, following their ballet film The Red Shoes of a few years earlier.

Seeing the opera again in the cinema brought back vivid memories of this film version; while the sound and vocal quality has probably not survived the test of time, the visual imagery remains powerfully present, which is the reason for dwelling on it here..

Of course, seeing opera in the opera house, in a live transmission and in a filmed version are different experiences. Hoffmann can be equally valid in all three media, having particular advantages in each. In film there is the easy continuity into the flashbacks of the three stories and no restriction to the confines of a stage setting, giving more liveliness to the tavern scenes and more realism to the Venice lagoon. On the stage there is the real live atmosphere without audio-visual intervention but in this instance the high definition transmission had compensations which almost made it the preferred option.

The performance benefitted from the ability of the camera to roam, focussing on close ups of the students and others in their solo contributions to the ensembles and most particularly to the antics of the doll Olympia. (This is to exclude the extraneous advantages of enjoying our own smoked salmon sandwiches and drinks while watching the interviews with the cast and House staff without the hassle of fighting at the bar.)

The director of Les Contes d’Hoffmann, left incomplete at the composer’s death in 1880, prepared for performance by Ernest Guiraud and first given in 1881, has two major decisions to make. The first of these is to decide the order of the three stories. Usually Olympia first, though I have seen her second, with Antonia or Giulietta last – there is no correct order.

The second decision is whether these roles are performed by a single singer or by three. The dogmatic assertion by Richard Bonynge in his booklet of the recording of Joan Sutherland that it has to be the same is nonsense, if excusable nonsense in the circumstances, as is demonstrated by the Met’s production under review; the contrast between the characters, the doll, the artiste and the courtesan, is more important than their identity in Hoffmann’s imagination.

What makes this performance so outstanding is the singing and characterisation of the principals, Joseph Calleja as Hoffmann with Kathleen Kim, Olympia, Ekaterina Gubanova, Giulietta, Anna Netrebko playing Stella and Antonia with Kate Lindsay as Nicklausse, supported by the conducting of James Levine who brings a fresh excitement to the score. The baddies are all performed by Alan Held.

One of the sensations of the occasion is the young Korean American soprano Kathleen Kim with a clear and accurate coloratura who becomes the mechanical doll Olympia matching perfectly her gestures and movement to the music. Netrebko again impresses with her ability to fully inhabit the roles she sings, in fine voice, while Gubanova is suitably enigmatic as the Venetian temptress. Kate Lindsay gives a very intelligent interpretation of the sardonic and detached Nicklausse, perhaps leaning a little too much to the villain; it is a performance highly reminiscent of Pamela Brown in the movie with even a physical resemblance.

The other sensation is the thirty-one year old Maltese Joseph Calleja, rapidly making his name as one of the leading tenors of today. Like all great singers his voice is unique. In build and stage presence he is not unlike Placido Domingo with whom he also shares firmness of vocal line. However, the timbre of his voice recalls romantic tenors of an earlier age.

The production is directed by Bartlett Sher. At its best it helped to rekindle memories of the film version of Powell and Pressburger. At its worst it tried to impose the director’s notion of the supposed sexual preoccupations of a modern audience, with a gratuitous encounter between Hoffmann and Stella at the opening of the Prologue, near-naked dancers at the presentation of Olympia to assembled guests and a final scene which gave the Venice Carnival the atmosphere of a lap-dancing club.

This is not an appropriate visualisation as an accompaniment for the glorious stream of melody and vocal pyrotechnics which constitute this opera, epitomised by the celebrated barcarole which pervades Act III.