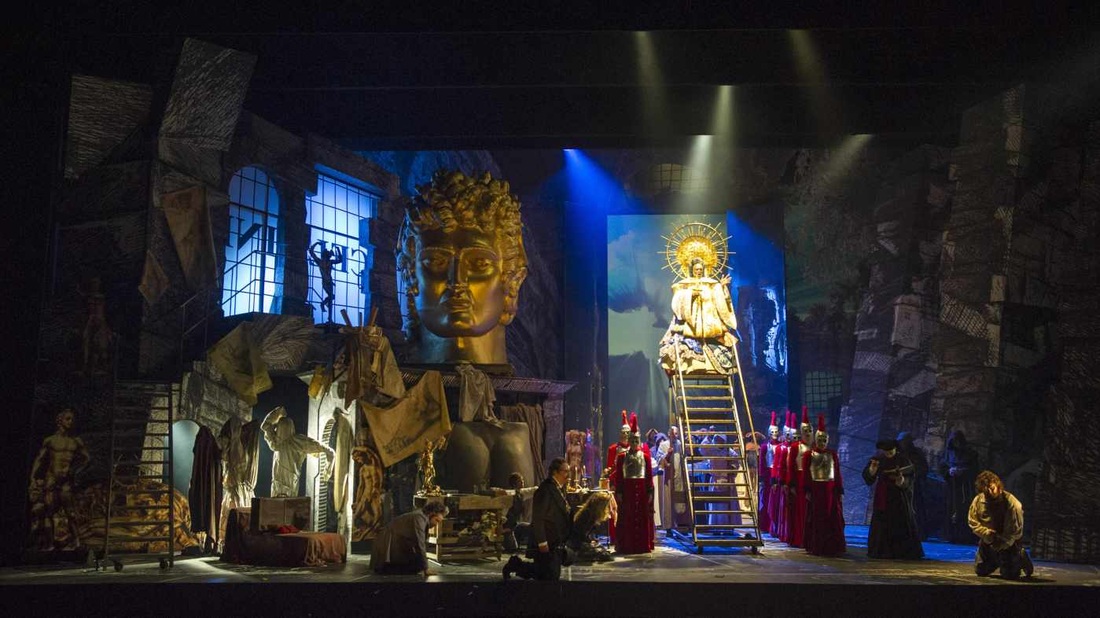 Berlioz’ first opera is a tribute from a leading French nineteenth century flamboyant romantic to a flamboyant renaissance Italian craftsman. The production under review aims to be a tribute to both from a larger than life modern entertainer. All three need to be approached warily.

Benvenuto Cellini’s autobiography is a fanciful embroidery on his life completed in 1563 when the author was sixty-three, eight years before his death in 1571. I recounts the trials and tribulations, personal, artistic and professional of a renaissance artist of his time. Berlioz' Opera cleverly captures the essence by concentrating on two themes: the rivalry with fellow sculptors for the patronage  of Pope Clement VII to win the commission of a large golden statue of Perseus with the head of the Madusa and the struggle to meet the deadline for the casting of the statue the morning after Ash Wednesday. At the same time Cellini is trying to win the hand of Teresa, daughter of the Papal Chancellor Balducci, from Fieramosca, a rival for the commission, to whom she is engaged. In the course of this Cellini kills Pompeo, Fieramosca's assistant, and has to obtain papal pardon for that too.

ENO's choice of Director is Terry Gilliam best known as a member of Monty Python's Flying Circus but is also a film director of some note. is first opera production, also for ENO, was Berlioz' The Damnation of Faust in 2011. On entering the cinema, one was somewhat alarmed to see it advertised on the screen as 'Terry Gilliam's Benvenuto Cellini' not Berlioz'. . We need not have worried. What came over from the start was a serious attempt to do justice to the opera the Composer's vision of the story.

Cellini (Michael Spyres) reveals himself as one of a group of revellers serenading Teresa (Corinne Winters). He arranges to elope with her over the Mardi Gras Carnival, disguised as a white friar and accompanied by Ascanio  his manager (Paula Murrihy) in brown. Unfortunately this arrangement is overheard by Fieramosca (Nicholas Pallesen) who will dress similarly with Pompeo (David Soar). The resulting confusion and its aftermath lasts until the bell marking the beginning of Lent with the killing of Pompeo and the arrest of Fieramosca, mistaken for Cellini. It must have been tempting to treat such antics as a Monty Python send-up. Thankfully this was resisted. The singing and staging were exemplary with Spyres outstanding as Cellini; under Edward Gardner's baton the orchestra played brilliantly the largely unfamiliar score with the unexpected intrusion of the well-known Roman Carnival music.

In ACT II the complications of ACT I are resolved but the main focus is the casting of the statue in time in the face of all obstacles which in any age can afflict the completion of a major project including industrial action, shortages of materials, unwanted pressure from the commissioner Pope Clement VII. Played by Willard White he descends from above accompanied by red-coated bodyguards, reminiscent of Monty Python's Spanish Inquisition. But ACT II is not so satisfactorily directed. Indeed we learnt in an interval talk that Gilliam almost gave up and it shows. One had the impression that a certain amount of ad libbing was going on.This is a pity: the casting of the statue is the great set-piece climax of Cellini's autobiography - a fine piece of Renaissance literature. It deserves a better stage representation.

Nevertheless there was a great deal to enjoy.