Der Rosenkavalier is an extremely familiar opera although I have only rarely seen it staged, the last occasion being a WNO production in Oxford in 1990 (with a young Amanda Roocroft as Sophie). Although having strong visual memories, my main familiarity is through the 1957 LP recording, still in mint condition, with Karajan conducting Elizabeth Schwartzkopf, Christa Ludwig, Theresa Stich Randall and Otto Edelman which sets an almost unreachable musical standard against which to judge subsequent performances. 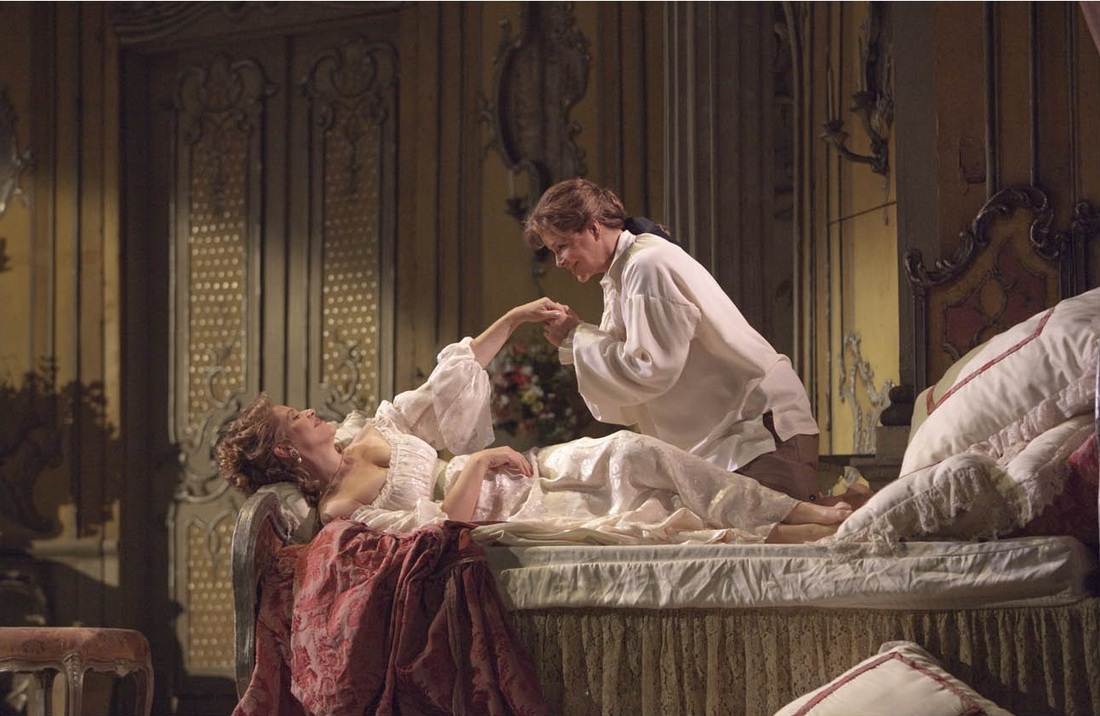 Renee Fleming as the Marschallin and Susan Graham as Octavian in a scene from Strauss’s “Der Rosenkavalier”
Photo: Ken Howard/Metropolitan Opera
Octavian, seventeen year-old lover half the age of Marie-Therese, the wife of a Field Marshall, is engaged to present a silver rose to fifteen year-old Sophie von Faninal, daughter of a recently ennobled merchant, to mark formally her betrothal to thirty-five year old, uncouth country cousin, Baron Ochs auf Lerchenau. Ochs has encountered Octavian disguised as a chamber-maid, to avoid recognition, at Marie-Thérèse’s levée and has arranged an assignation at an inn, where Octavian, who has fallen in love at first sight with Sophie, has prepared a surprise reception for Ochs with hauntings, confrontations and humiliation culminating with the arrival first of Sophie and von Faninal followed by Marie-Thérèse who generously gives her blessing to the young lovers, letting the confused Octavian off the hook.

All this is served up as a delightful piece of Viennese froth carried along on a wave of alternately exuberant and tender melody which rings in our ears for days after, conveying a light cynicism about affairs of the heart. Octavian is not the Marschallin’s first lover, neither will he be her last (poignant though the ending of the opera may be). Baron Ochs will not be reformed by his surrealist experiences and we do not expect Octavian and Sophie necessarily to remain faithful forever. Added spicy ambiguity for the audience is having Octavian portrayed by a woman but spending much of the time disguised as a woman.

The version of Der Rosenkavalier seen at the Royal Opera House is the sixth revival of the 1984 production directed by John Schlesinger with sets by William Dudley and costumes by Maria Björnson. Originally conducted by Solti with Kiri Te Kanawa as Marschallin, Agnes Baltsa/Anne Howells, Octavian and Barbara Bonney, Sophie; it was revived in 1987, 1989, 1995, 2000, 2004, on each occasion with star-studded casts including Renée Fleming as Marschallin in 2000. Earlier singers of this role at Covent Garden include Frieda Hempel, Lotte Lehmann, Frida Leider, Elizabeth Schwarzkopf and Sena Jurinac – hard acts to follow.

This revival was directed by Andrew Sinclair and conducted by Kirill Petrenko. The cast included Finnish soprano Soile Isokoski and French mezzo Sophie Koch both with extensive experience of the roles of Marschallin and Octavian respectively. Lucy Crowe sang Sophie, having performed the role for Scottish Opera (a run which she famously interrupted to make her sensational Oxford debut at short notice at the Lieder Festival in 2006 in Wolf’s Italienisches Liederbuch). Peter Rose was Ochs and veteran Thomas Allen played von Faninal.

The very large cast of characters cannot all be mentioned by name though all gave excellent performances; particularly catching the attention, entering the spirit of things, were Leah-Marian Jones as an experienced Annina (played in1995 and 2000), accomplice of the intriguer Valzacchi, played by Graham  Clark, and Elaine Mc Krill, as Sophie’s lively and worldly-wise duenna Marianne. The ‘Italian singer’ was Wookyung Kim.

This was a thoroughly satisfying, traditional production following closely the stage directions of Strauss and librettist Hugo von Hofmannsthal leaving us free to enjoy some glorious singing. The complex stage business in each Act was handled excellently. As Marschallin, Isokoski gave a convincing performance, if not, in Act I, reaching the vocal heights of some of her illustrious predecessors, conveying well the complex emotions of a woman in love foreseeing that her current affair was passing its zenith though not so well her complementary role as aristocratic mistress of a chaotic household.

Koch portrayed well the evolving emotions of Octavian, from pride in his conquest of a mature woman to surprise by his response to young Sophie to bewilderment at having to reconcile his new love with his loyalty to an existing relationship. Crowe’s Sophie was superb. Her first appearance, eagerly awaiting the arrival of her betrothed, Baron Ochs, followed by her disillusionment and spirited rejection of his brutish advances, in the meantime disturbed by her emotional reaction to Octavian, bearing the silver rose, gave a subtly realistic picture of a teenager’s reaction to such events. It raised the level of the performance.

British bass Peter Rose gave a convincing portrayal of Ochs. Also with world-wide experience of the role (including the Met in 2005), he gave a rounded picture of the boorish country cousin who, while not evoking any sympathy, at least gained our understanding that he knew no better. Thomas Allen as von Faninal gave his customary dramatic interpretation though no longer at his vocal peak.

But all critical reservations were swept away when the three female voices blended together immaculately in the final trio giving us the perfect bitter-sweet ending to the evening’s entertainment.

On this occasion, unable to secure a table in the Crush Room, we were sustained by pre-ordered refreshments up the escalator to the Amphitheatre Bar, where they awaited us in the first interval. Our only disappointment was when our taxi just failed to deliver us to Victoria Coach Station in time for the 23.00 X90!

Regular readers will be aware that, since their inception in 2007, I have become a wild enthusiast of opera transmissions ‘Live from the Met in HD’, sharing with a worldwide audience of cinemagoers this new way of experiencing operas which has a validity of its own beyond that merely as a reproduction of what one sees from a seat in the theatre auditorium. From the first, Eugene Onegin, reviewed in 2007 to the most recent, Les Contes d’Hoffmann, I have recorded many transmissions which remain in the mind as outstanding operatic memories in their own right.

It is all the more disappointing to have to say, therefore, that the transmission of Der Rosenkavalier was not successful in this way. Instead of the camera drawing us into the action, enhancing the magic of the illusion, as on previous occasions, here it only served to focus on the reality of a youthful charade performed by a group of mature and experienced players. It is thus difficult on this occasion to review it other than as a stage performance viewed through the eye of the camera.

Owing to a satellite problem we were deprived of the orchestral Prelude depicting the love-making of the Marschallin and Octavian played by Renée Fleming and Susan Graham. The signal was restored in time for the rise of the curtain on the bedroom scene which follows, in which the representation of intimate gestures appropriate in the theatre proved acutely embarrassing in close-up. This is a place where strict adherence to the ‘book’ would have been discreet – ‘… the Princess who lies in bed. Her face is not seen, only her very beautiful hand and the arm revealed by her lace nightgown’ (trans. Walter Legge). However, this was the worst moment.

Fleming rapidly re-established her uncanny ability to inhabit the skin of the character she is playing for the camera at the same time as projecting her voice to the theatre audience (particularly notably as Tatiana in 2007 and as Thaïs in 2008). Her interpretation emphasised the human rather than the aristocratic side of the character, winning deep felt sympathy for her predicament.

Graham was not so convincing on screen, coming over as more mature than a seventeen year old and missing the full magic of the first encounter with Sophie, played by Christine Schäfer, also coming across as older than her years. The Icelandic bass Kristinn Sigmundsson played Baron Ochs. With a fantastic voice, he gave an interesting well-rounded interpretation of the role, more buffoon than boor and not totally unsympathetic. Thomas Allen again played von Faninal, in slightly better voice than at ROH. The only minor role to stay in the memory was Wendy White as Annina.

The production due to Nathaniel Merrill with sets by Robert O’Hearn is even more venerable than the Covent Garden version, dating from 1969. It then attracted from a prescient Saturday Review critic, Irving Kolodin, the comment that it gave ‘every promise of durability’ while being lukewarm about the performance.  The cast included Christa Ludwig, Leonie Rysanek, Reri Grist and Walter Berry.

The stage director is now Robin Guarino and the revival was previously seen in 2005 (with Angela Denoke and Graham) and in 2000 (with Fleming and Graham). Apart from the opening, it follows closely the stage directions of the score with some odd departures – the three orphans of Act I appear middle aged and the four children claiming Ochs’ paternity in Act III are replaced by an inconceivable number. The conductor was the Dutch Edo de Waart who gave a rousing reading of the score in true Viennese spirit with exquisite timing.

These were two very enjoyable performances of Rosenkavalier. Although, on this occasion, the second should have been seen in the opera house, it is a measure of the quality of the HD presentation that one can confidently compare them as performances. Both were well-established traditional productions, both with very strong casts given great orchestral support.

Fleming confirmed herself as today’s outstanding Marschallin, emphasising her warmth and humanity, while Crowe emerged as a truly impressive Sophie. The two Ochs were complementary boor and buffoon, Sigmundsson, the latter, probably closer to Strauss’ and von Hofmannsthal’s conception. Of the two 'kavaliers', Koch gave by far the better characterisation of Octavian, although Graham, more vocally mature, was convincingly coquettish disguised as ‘Mariandel’. The supporting casts were equally admirable.