This was the first opera of the 2010-2011 season at the New York Metropolitan Opera to be screened worldwide in high definition. It was also the first of the Met’s new Ring cycle, produced by Robert Lepage, which has been five years in preparation. Unable to obtain seats for the ‘live’ transmission on the Saturday, sold out within hours of booking opening, we were able to view it the following day in a nearly half empty cinema (a welcome innovation giving a wider audience of less fanatical opera goers the possibility of experiencing the operas). 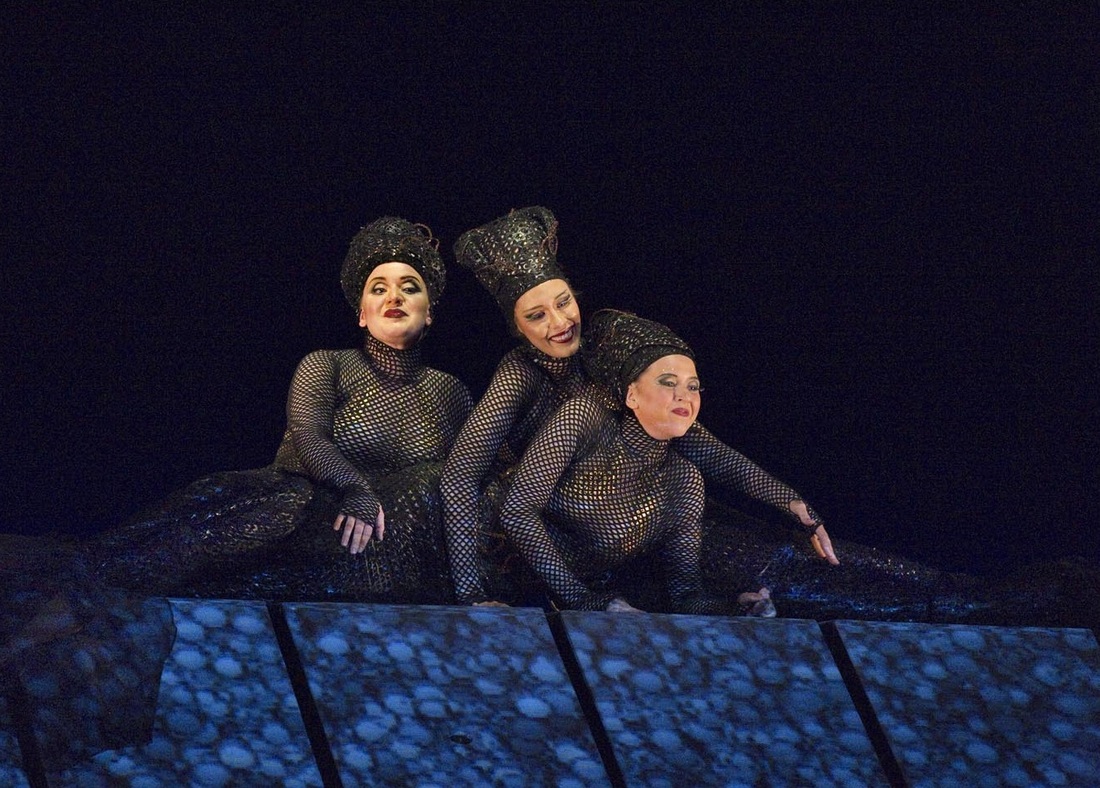 Jennifer Johnson as Wellgunde, Tamara Mumford as Flosshilde, and Lisette Oropesa as Woglinde in Wagner’s “Das Rheingold”
Photo: Ken Howard/Metropolitan Opera
The cinema presentation opened with an introduction to the new production and the now customary interviews with cast members and production team, explaining that the elaborate set, designed by Carl Fillion, required a strengthening of the stage to bear its forty ton weight.

The set consisted of groups of movable planks, steeply raked to represent the Rhine and support the Rhinemaidens clad in corset harnesses, covered by mermaid costumes (do we have to sing while we are swimming? asked one, visibly scared at the realisation of what was expected); the director explained that the intensity of the bubbles was determined by the power of their singing. The planks transformed into a long staircase for the way down to Nibelheim. The lighting design of Etienne Boucher helped to set the atmosphere.

While admiring the ingenuity which had gone onto mounting the production one was left wondering whether it was worth the effort to produce such an elaborate abstract representation for what was essentially a small-scale, straight-forward and realistic mise-en-scène. Gone are all the pretentious attempts to tie the opera to fashionable psychological, socio-historical or political theories which most directors seem to find obligatory these days. The drama is played out in the manner of a Brothers Grimm fairytale with costumes in the style of the Arthur Rackham illustrations which used so to scare me when I was little.

Wotan has engaged two giants to build Valhalla, a palace ‘fit for the gods’. To pay for it, Wotan, aided by Loge, tricks the Nibelung Alberich out of a hoard of gold stolen from the Rhinemaidens; this is exchanged for Freia who has been held hostage by the giants awaiting payment and the gods enter Valhalla. In this production the characters are fairytale characters, not the archetypes of Wagner’s grand music drama.

These gods are human, as are the Nibelung, but the main strength of the production is the subtle way in which the human qualities of the characters are presented. Thus Wotan is presented as a stubborn obsessive, in denial about his debt-crisis, Fricka (Stephanie Blythe – we are concerned about her physical well-being) as the long-suffering wife. Of the gods, Loge (Richard Croft) is the con man ‘fixer’ (attracting boos at the end), Donner (Dwayne Croft) is impetuous, his solution to everything is to wave his hammer at it, Freia (Wendy Bryn Harmer) fragile yet deeply humiliated at being exchanged for gold. Likewise the Nibelung Alberich (Eric Owens) and Mime (Gerhard Seiger) are extremely well depicted; we look forward to their reappearance in Siegfried. Only Erda dressed (surely not deliberately?) as Charles Addams’ Morticia Munster, struck an incongruous note.

Musically, the performance, conducted by James Levine, was superb. It is difficult to fault or to single out any of the singers but my attention was particularly held by the Rhinemaidens (Lisette Oropesa, Jennifer Johnson and Tamara Mumford who appeared at home in their costumes and apparatus after their initial difficulties), Eric Owens’ Alberich and the clear tones of Wendy Bryn Harmer as Freia.

It is fashionable in some quarters to belittle Bryn Terfel but his voice and presence were just right for this Wotan, his optimistic final words in praise of Valhalla made poignant by our knowledge of disasters to come.

Rheingold is notoriously difficult to produce. Has anyone ever seen a fully satisfactory production? This one engaged our attention at the time as a piece of story- telling and we look forward to the rest of the cycle in this style. However in retrospect we missed, as I said, the grandeur of vision and archetypal quality of Wagner’s invention which left a feeling of something lacking.