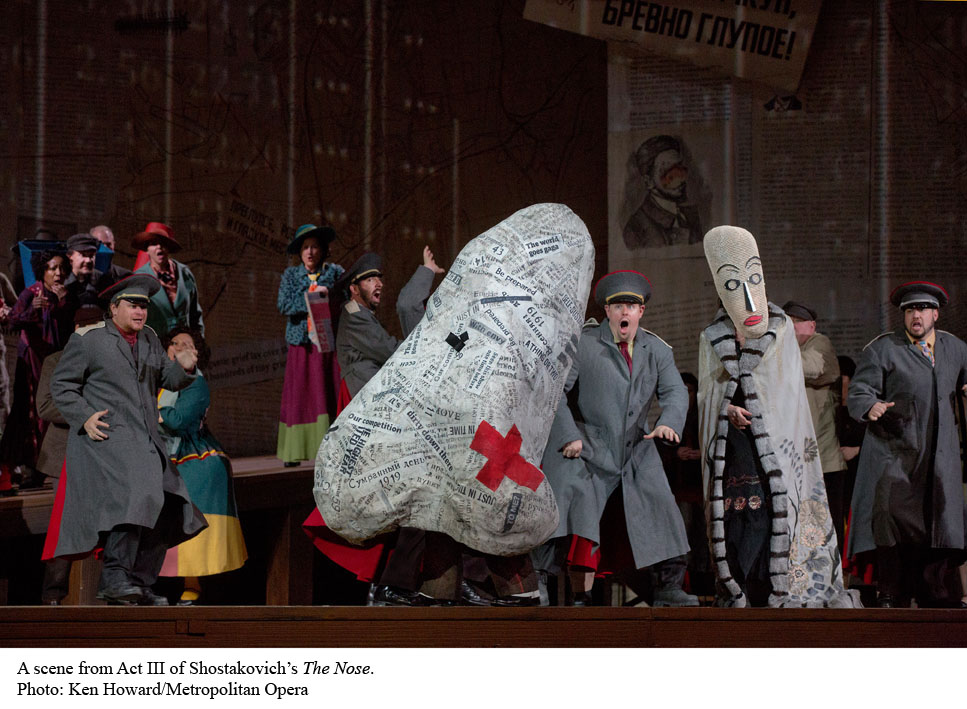 
Shostakovich’s opera The Nose was first performed in 1930 when the composer was twenty –four yearsold. Based on Gogol’s short story satirising the philistinism and officialdom of society in general. Updated to the early Soviet era, it survived sixteen performances before Stalin’s clampdown on the arts and was revived in Moscow in 1974, in a chamber production after the score had been rediscovered in the basement of the Bolshoi Theatre in the 1950s. This somewhat unlikely addition to The Met’s repertoire is a co-production with Festival d’Aix en Provence and Opéra de Lyon both known for highly imaginative interpretations. This is its thirteenth appearance at The Met since the first in 2010.


The plot concerns the adventures of the nose of a functionary Kovalyov who wakes up one morning to find that the nose has become detached and taken on a life of its own, enlarged to person-size. The opera follows satirically the various personal, social and business interactions of its owner until eventually Kovalyov wakes up with the nose restored.

This bizarre and apparently absurd surrealist plot somehow sustains a three hour opera in three acts and seventeen scenes with a cast of seventy. It is constantly entertaining, yet with passages in which it was impossible not to nod off. One awoke without feeling one had missed anything. The production and design by William Kentridge set it in its time – the jazz-age, with costumes and scenery reminding of the French avant-guard abstract cinematic style of the twenties. The score was captivatingly delivered by the conductor Pavel Smelkov. This was, on the whole, a unique and entertaining operatic experience.