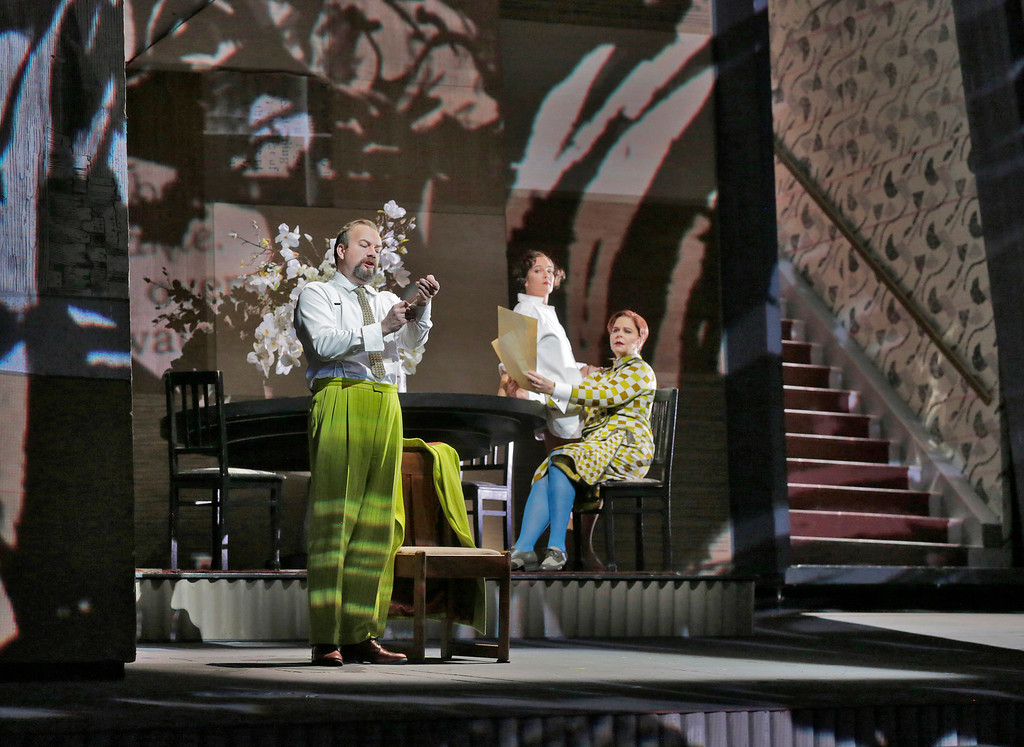 Marlis Petersen in the title role, Johan Reuter as Dr. Schön, and Susan Graham as Countess Geschwitz in Berg's Lulu. Photo by Ken Howard/Metropolitan
This production of Alban Berg’s second, unfinished opera Lulu is directed by William Kentridge is an overwhelming audio-visual experience in which everyone concerned makes their contributes to a unified whole. It is best reviewed by listing these contributions.
First, the opera is based on two plays by the pre-expressionist Frank Wedekind (1864-1918) translated as The Earth Spirit and Pandora’s Box (also the subject of the silent movie masterpiece by PW Pabst). They concern Lulu, best described as a self-destructive fille fatale who is the best friend and worst enemy of herself and of all the men and women in her life. Berg’s opera over a long period of gestation was left unfinished at his death in 1935. Acts ! and II received first performance in 1937. Berg’s widow would not permit completion and it was not until 1979 after her death that the completed three act version was performed in Paris, edited seamlessly by Friedrich Cerha, our third contributor. The director of the current revival, a co-production with Dutch National Opera and English National Opera, is William Kentridge. He first came to our attention as director of The Met’s production of Shostakovich’s The Nose last season (in comparison a trivial opera) and his jazz-age surrealist style was immediately apparent in Lulu. It is rare these days to find a director so sympathetic to the opera that the visual aspect contributes so much to the experience without distortion of the overall impact. It is complex: the costumes (designer Greta Goiris), realistic to carry the action forward, but adopting paper covering and cylindrical head pieces with line drawings of the body in symbolic comment; production, set and lighting designs (Catherine Mayburgh, Sabine Theunissen, Urs Schönebaum) combine to give a weird expressionist atmosphere to the whole. Musical direction is in the hands of Welsh National Opera’s Lothar Koenigs standing in for James Levine, making The Met orchestra sound like that of WNO (and that is a compliment). It is remarkable how the music holds our attention with so much happening on the stage.
A married newspaper owner Dr Schön has plucked Lulu off the street, has provided her with an education and a physician husband in order to keep her as his mistress. After a Prologue in which an animal trainer introduces the cast as animals in a menagerie, the opera opens with Lulu having her portrait painted. The artist is attempting to seduce her when her husband enters and dies of shock. Now wealthy, she marries the painter but he commits suicide when he learns of her past from Schön who wants her out of his life so he can marry. A jealous Lulu wrecks the engagement while carrying on affaires with inter alia a Prince and Schön’s son Alwa who, as a dance director, has now engaged her in his company. Eventually Lulu marries Schön, but in an argument over her continuing dissolute lifestyle including a liaison with lesbian Countess Geschwitz, she shoots him. Convicted and imprisoned, she escapes to Paris, aided by Alwa and Geschwitz, from the prison hospital where she is recovering from a bout of cholera. Losing all their money in a financial crash, they move to London where Lulu return to the streets. After a syphilitic Alwa is killed protecting her from one client she encounters Jack the Ripper, in the shape of Dr Schön, who despatches both her and Geschwitz. The opera end abruptly.
There are around twenty-five named characters in the cast, all of whose lives are affected, if not destroyed, by Lulu. In a way, the Prologue is superfluous in this production, the animalistic nature of the characters being replaced by their personae in the paper costumes. All perform well. It cannot be easy to follow the conductor’s beat when so much is going on with costume changes and moving shadows, requiring also precise timing from the stage management. The principals are exceptionally good: there is much to savour in the decline and fall of father and son, Schön and Alwa played by Johan Reuter and Daniel Brenna; the cameo roles of the Painter (Paul Groves), the Acrobat (Martin Winkler) and an old man Schigolch, friend and possibly father of Lulu (Franz Grundheber) stood out. Susan Graham played Geschwitz. In intermission interview she confessed to having had difficulty with the role and, indeed, one wondered what a nice girl like her was doing in such company. Of course Marlis Petersen as Lulu was star of the show. It is a part she has made her own in fifteen different productions. With exactly the right balance between predator and victim, she intrigued us with expressionless face and sinuous body, dominating this extraordinary performance of this extraordinary opera.
This was a production to be seen in the opera house. The TV Director Matthew Diamond. He did his best but with so much going on visually a three dimensional view was a necessity. May it come to the London Coliseum soon.