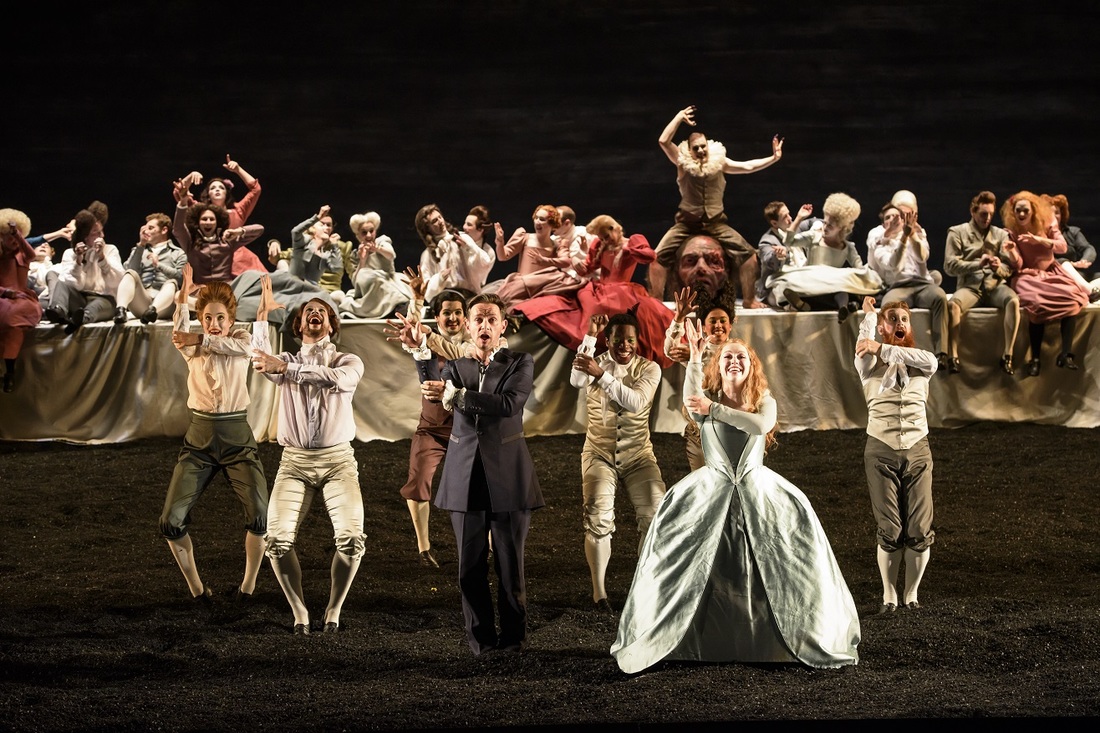 I once remarked to John Eliot Gardiner that Rameau did for the musical what Handel did for opera. His indignant reply was: had I seen Hippolyte et Aricie? I had not then butt I did see it at Glyndebourne in 2013. It confirmed my view. What I did not know then was that Handel could also write musicals, except that they were instead called oratorios since they could not, as religious subjects, be staged. Two of the composer’s oratorios have been successfully staged as operas: Theodora, by Peter Sellars for Glyndebourne and Jephtha by Katie Mitchell for Welsh National Opera. A sensation of the 2915 Glyndebourne season was the staging of Handel’s oratorio Saul by the Australian director Barrie Kosky, but with dancers and choreographed chorus this was a musical rather than opera. It was reviewed as an opera for BSECS by: Ivan Ćurković on 28th July 2015. A televised version of the production has now gone on tour in selected cinemas around the UK. Kosky is the acceptable face of avant-garde productions, being featured on the cover of Opera Now Magazine. His production of Shostakovich’s first precocious opera The Nose has just opened at the Royal Opera House, having been seen ‘Live from the Met in HD’ in 2013.
The oratorio Saul takes up the biblical story with the Israelites fêting David after his slaying the giant Goliath (I Samuel, Chapter 18). David, welcomed by King Saul, his son Jonathan (who becomes his best buddy) and daughters Michal and Merab. David is offered Merab’s hand in marriage but instead he and Michal fall in love. Driven mad by jealousy at the continuing adulation of David, Saul orders Jonathan to kill him. Jonathan pleads for David’s life. Saul appoints David commander of the Israelite army in the hope he will be killed in battle. Once again victorious, David has again to escape Saul’s rage, which leads Saul to attempt to kill Jonathan when he defends David. In disguise, Saul consults the Witch of Endor who summons the spirit of Samuel to predict the defeat of Israel by the Philistines and the deaths of Saul and Jonathan. Once more David comes to the rescue of the Israelites.
The proceedings open with the celebration of David’s slaying of Goliath with full chorus of Israelites enjoying refreshment at a large table loaded with food and drink. The head of the giant grotesquely rolls around at the front of the stage. Immediately we were drawn into a cinematic experience; that it was actually being acted out on stage became irrelevant. It is regrettable that no credit was given in the cinema handout to the TV direction (an omission of which The Met in HD was also guilty for a very long time)
We were introduced to the main characters in a star-studded cast. Saul was played by Christopher Purves, David by Iestyn Davies and jonathan by Paul Appleby. Saul’s daughters were played by two of my favourite singers: the snooty Merab by Lucy Crowe and Michal by Sophie Bevan. Sadly, they had little to sing but both elegantly filled their roles, both adept at holding the audience attention when not singing. Other key roles were performed by Benjamin Hulett as the High Priest by John Graham-Hall as the Witch of Endor.
All the men entered into the spirit of the production, characterised by sexual ambivalence, in very tactile performance – much fondling of heads in close-up, for example hinting at the ambiguity in the relationship between David and Jonathan. Only the girls appeared ‘straight’. Extreme was the Witch of Endor with a male head but with pendulous lactating woman’s breasts which Saul suckled in his underpants (the ‘disguise’ of the script).
The conductor was Ivor Bolton with the Orchestra of the Age of Enlightenment  The creative team under Kosky was designer Katrin Lea Tag, choreographer Otto Pitcler assisted by Silvano Marraffa and lighting designer Joachim Klein.
In the cold light of the written word this staging seems outrageous. But it worked and provided thought-provoking entertainment. Above all, Handel was not lost and proved once again that his dramatic music is robust enough to stand up to the efforts of even the most extreme director.
e to edit. 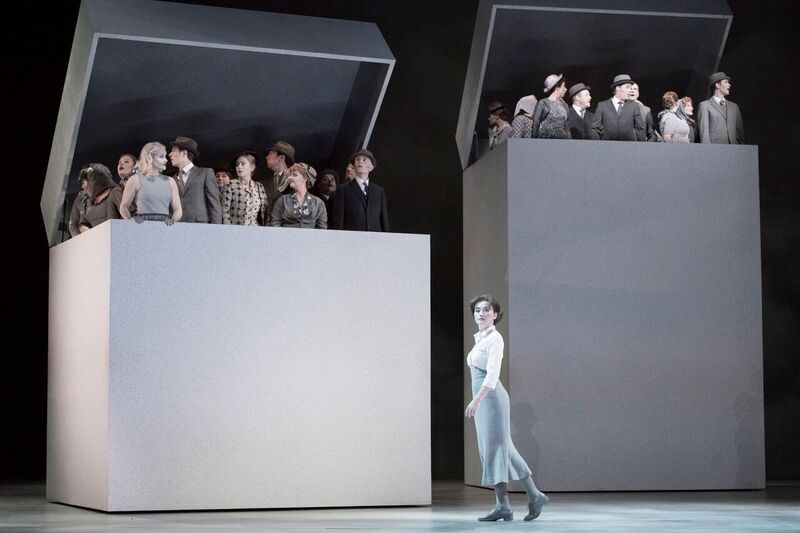 _photoRichardHubertSmith
For once, the annual visit to Glyndebourne was in perfect summer weather, on a windless day with cloudless skies. This year the journey was marred by traffic congestion on the M25, taking three hours, rather than two but this contingency was allowed for in the planning. We arrived in comfortable time for the hors d’oeuvre of the Jerwood Young Artists Ebert Room Recital. These Artists are identified from the Chorus as promising future soloists.
This year, the artists were sopranos Julia Hamon and Natalia Tanasii, mezzo Marvic Monreal, tenor Thomas Atkins and baritone Huw Montague Rendall. The piano accompaniment was played by an extremely talented young pianist Matthew Fletcher, who has been a répétiteur at Glyndebourne since graduating in 2012. All the singers gave good operatic performances, showing they could cover for the roles they sang, though Hamon missed the full sensuality of Lehar’s Meine Lippen, sie küssen so heiss. Outstanding was the baritone Huw Montague Rendall who gave extremely mature and accomplished characterisations of the contrasting roles of Papageno, from The Magic Flute, and of Largo al Factotum from The Barber of Seville.  Also memorable were the warm mezzo voice of Marvic Monreal in Gluck Che faro senza Euridice and Natalia Tanasii in an evocative Song to the Moon from Rusalka.
The opera was Berlioz’ last, Béatrice et Bénédict adapted from his revered Shakespeare’s Much Ado About Nothing. In fact, it is not so much an opera as a two act musical entertainment. It concentrates on the battle of words and wit between the protagonists, culminating in their falling in love, set against the background of wedding preparations for Héro, Béatrice’s cousin, and Claudio, comrade-in-arms of Bénédict. The ‘much ado’ of Hero’s feigned death following a false accusation of infidelity engineered by Don John is not part of the opera.
The opera is directed by Laurent Pelly who also, as often, designed the costumes. The ingenious set design, consisting of a number of large off-white movable boxes, initially opening at the top to reveal the cast and later used for entrances and exits. With lighting designed by Duane Schuler together with the grey costumes, I found myself in agreement with The Times critic in describing the atmosphere as fifty shades of gris. The surtitles were provided by Ian Julier, giving English translation of the dialogue adapted by Agathe Mélinand, a long-time associate of Pelly. As far as one could tell, this followed closely much of the wording of Shakespeare. This was a typical Pelly production in which the audience is drawn into intimate contact with the action. In the past I have compared him with the film-maker Erich Rohmer. (In the first I saw, in Paris, L’Elisir d’Amore, cyclists rode along the back of the stage, waving at the audience. We spontaneously waved back.)
After a scintillating performance of the lengthy overture, well-known from the concert hall, the curtain rose on two large white boxes whose lids opened to reveal the townsfolk of Messina with governor Léonato together with daughter Héro and niece Béatrice, welcoming home Don Pedro and his troops, including Claudio, engaged to Héro, and Bénédict, who resumes his war of words with Béatrice. While wedding preparations are going on, which include a rehearsal of a wedding song composed and directed by Somarone, the others conspire to bring Béatrice and Bénédict together by allowing each to overhear declarations of love by the other.
Béatrice is sung by Stéphanie d’Oustrac. Excellent in her repartee with the Bénédict of Paul Appleby, her solo in which she finally admits her love is heart-breakingly beautiful, the high point of the evening. Héro, performed on this occasion by Sophie Karthäuser, replacing Hélène Guilmette who had had to withdraw from the production, had a less powerful voice, which slightly affected the balance. The end of Act 1 is an extended rehearsal of Somarone’s wedding song. This is a masterpiece of French comic timing performed by Lionel Lhoti, conducting both chorus and orchestra, sending us to our picnics in the happiest frame of mind. After the interval, in the short second act, the wedding party is taking place off stage while a long dinner table emerges from one of the boxes. Béatrice and Bénédict are reconciled, at least for long enough to make it a double wedding. All rejoice.
The conductor was Antonello Manacorda, substituting for Robin Ticciati who is recovering from surgery. One could not have asked for better. Under his baton, the London Philharmonic Orchestra gave wonderful support, bringing out the subtlety of Berlioz’ instrumentation.
Critical response has been divided, some making it out to be inadequate as celebration of the Shakespeare centenary. But it should be taken at face value as a piece of light entertainment, the composer’s loving tribute to the playwright.