From the sublime to the ridiculous

Round-the-clock Mozart, reported in the last issue, was interrupted by the call of duty to review La Fanciulla del West, seen on the repeat of the transmission ‘Live from the Met in HD’ on Sunday 9 January. The opera had its first performance a century ago on 10 December 1910 at the New York Metropolitan Opera. It was the first premier ever staged at the Met and was received with rapturous acclaim, being conducted by Arturo Toscanini with Enrico Caruso in the cast. The composer himself regarded it as one of his best operas. One should therefore try to take it seriously and judge it accordingly. 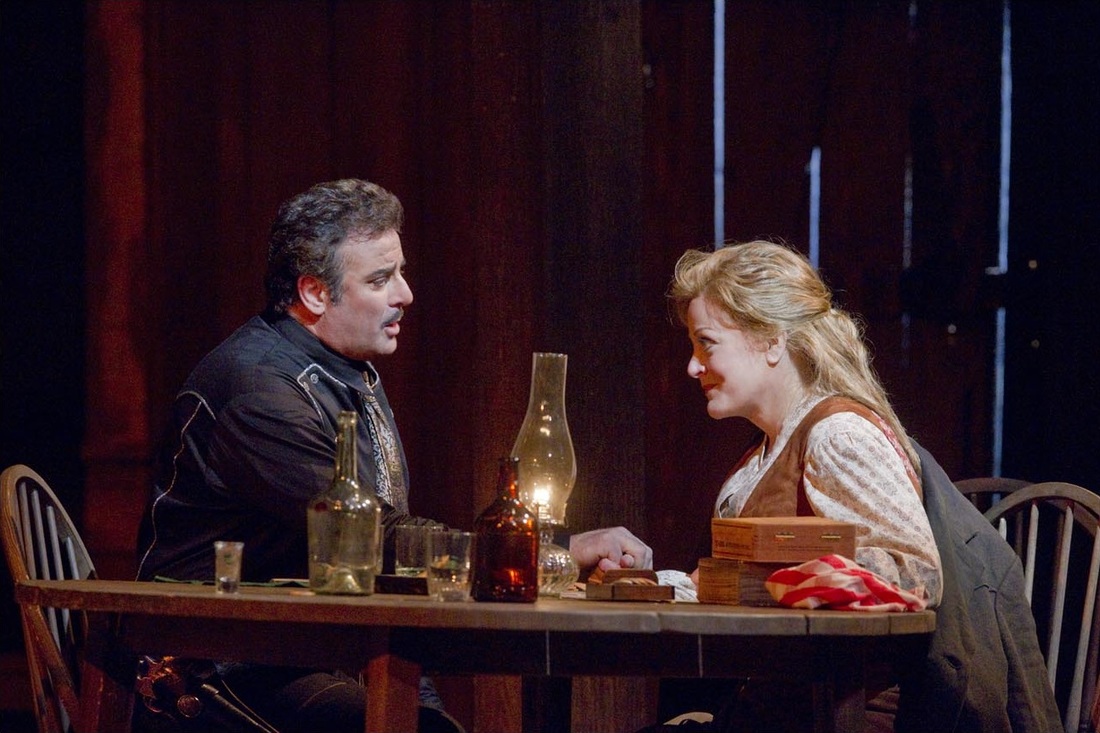 A scene from Puccini’s “La Fanciulla del West” with Marcello Giordani as Dick Johnson and Deborah Voigt as Minnie
Photo: Ken Howard/Metropolitan Opera
This I find it impossible to do, though others have tried: the anonymous Italian contributor to The Phaidon Book of the Opera, usually reliable, in an extended entry claims ‘Puccini’s debt to Debussy and to the Strauss of Salome is obvious’. Not to me it ain’t! And I don’t believe this is entirely due to my notorious blind-spot for this composer’s operas.

Having got this off my chest, I confess I was not entirely unmoved by the music or the production. This was almost entirely due to the redeeming value of Deborah Voigt’s extraordinary virtuoso performance in the title role but I must grudgingly admit this could not have been without some merit in the music and the drama. Indeed my recollection of the only previous occasion on which I have seen the opera, Welsh National Opera in 1991 with the then stalwarts Susanne Murphy, Dennis O’Neill, Donald Maxwell is of a perfectly acceptable evening’s operatic entertainment.

Minnie, the celibate proprietor of the Polka Saloon, caters for the domestic, spiritual, educational and recreational needs of a group of rough, hard drinking, card-playing yet homesick gold miners; the sheriff Jack Rance covets her hand in marriage but she falls head over heels for the handsome stranger Dick Johnson, a wanted womanising bandit Ramirez in disguise. Yes, Fanciulla is the opera where blood dripping through an attic floor betrays the presence of a fugitive. A wounded Ramirez, hidden by Minnie, is discovered by Rance who agrees to wager, in a game of poker, Ramirez’ freedom against Minnie’s hand. Minnie cheats and wins.

The opera could and, in my view, should end there. Indeed it was some way into the intermission that I recalled that there was more to come. In a dramatically unconnected final act Ramirez, recaptured and about to be lynched, is saved by Minnie’s appeal to the mob’s better nature; the lovers are allowed to go free. The familiar story of the love-starved woman falling for an unsuitable rogue is dressed up as not entirely plausible hokum. (Try as I may and aware of the popularity of Puccini as a composer of opera, I find myself unable to modify this opinion.)

The curtain goes up on the realistic stage-set of the Polka saloon, designed by Michael Scott, with a large cast of stock western movie characters going about their business. It is impossible to avoid the obvious reaction, particularly for the cinema audience, that we are watching a spaghetti western, Mollie get your gun. However, hokum or not, the cast do their best to override the implausibility.

The stage management of the chorus in Acts I and III is superb with many cameo roles of the mining community very well sung. The three principals are Deborah Voigt as Minnie, Marcello Giordani as Johnson/Ramirez and Lucio Gallo as Jack Rance; the producer is Giancarlo Del Monaco and conductor Nicola Luisotti. Of the male characters, Rance is by far the more interestingly developed and receives a fine, intelligent interpretation from Gallo, particularly in Act II. It is a further weakness of the opera that the personality of Ramirez is so little developed, leaving the tenor role merely a foil to the soprano and leaving no lasting impression.

It is Voigt who saves the day by her rounded depiction of Minnie’s womanly character, as caring saloon proprietor in Act I, falling in love in Act II and boldly intervening to save her lover’s life in Act III. Above all, the development of her love for Ramirez (albeit aided by personal chemistry, admitted in an intermission interview) recalls her 2008 Met Isolde.

For once, in the cinema transmission, we feel we are watching a movie rather than an opera to the extent that it seems ludicrous that the singing is not in English. We are led to the conclusion that, had he been born forty years later, Puccini might have made an adequate composer of film music, perhaps even rivalling Korngold.