Ernani was Verdi’s fifth opera, after Oberto, Un Giorno di Regno, Nabucco, and I Lombardi, first performed in 1844, the year before Tannhäuser. The story concerns Elvira who is genuinely fancied by three suitors:  the King Don Carlo, Silva her elderly guardian to whom she is betrothed and Ernani, dispossessed and outlawed who is the one she loves. 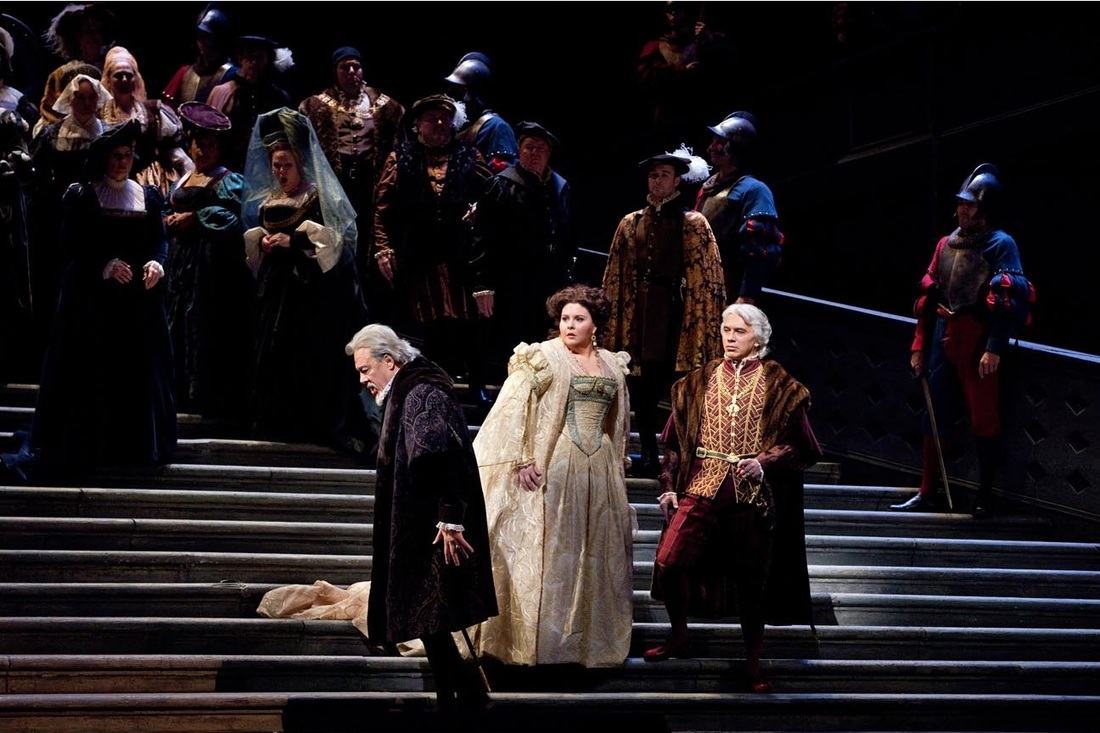 Ferruccio Furlanetto as Silva, Angela Meade as Elvira, and Dmitri Hvorostovsky as Don Carlo in a scene from Verdi’s “Ernani”
Photo: Marty Sohl/Metropolitan Opera
The plot is implausible and so complicated that all the sources disagree on details. It depends crucially on conventions of chivalry, hospitality and vengeance, foreshadowing those absurdities in Wagner from Lohengrin to The Ring, requiring the same suspension of disbelief, Elvira is abducted by Don Carlo, rescued by Silva and Ernani; Silva renounces his claim on Elvira on condition that Ernani fulfil a vow to kill himself on hearing a call from his horn. This he does at their wedding, Elvira following suit.

Fortunately the plot doesn’t matter. The opera is redeemed by glorious music in a sequence of demanding solos and ensembles. Early Verdi – yes – but looking forward to his mature style of Traviata and Simon Boccanegra. This performance was brilliantly conducted by Marco Armiliato.

Starting with the lady: Elvira was sung by the young soprano Angela Meade who first made her mark at the 2007 Met Auditions, with her rendering of Casta Diva, and took over the role of Elvira as cover in 2008. (All this explained in intermission interview with Joyce DiDonato and the showing of an audition documentary.) Although with youthful face she already has the build and bearing of a mature prima donna, with the voice to go with it. We were electrified by her aria at the end of Act I where she sang a faultless crescendo, starting from a divine pianissimo to a formidable fortissimo without a break. After that moment we were transfixed! Her’s was a masterly performance, not needing to make concessions for the camera.

Of the men, outstanding was the Silva of Ferruccio Furlanetto who gave a performance complete in HD, winning our sympathy as an elderly man seeing his last chance of love slipping away from him, alternating between fury and misery. Also in great voice was Dmitri Hvorostovsky, though as often with this singer, he appeared a little detached from the role he played. At one point he was seen to smile inappropriately, at least according to the subtitles.

The one disappointment was the tenor, Marcello Giordani, as Ernani who sang with an old-fashioned strangulated timbre and lacked dramatic impact. (I remarked this first on the Saturday live broadcast. It was less apparent in HD, seen at the Sunday encore.)

Indeed the whole production had an old-fashioned air in true grand opera style. In fact so much so that at times it teetered on self-parody, what with the tenor, Hvorostovky’s detachment, the intricacies of the plot and the literal translation of the libretto in the subtitles doing for this opera what the Marx Brothers did for Il Trovatore. But then there were Angela Meade and Ferrucio Furlanetto ….

For the cinema audience it came over as the film of a traditional stage production, the chorus magnificent in the opening drinking song. The staging was by Peter McClintock of the production by Pier Luigi Samaritani. The TV direction by Barbara Willis Sweete (still, disgracefully, not acknowledged in the cinema handout) was very good, though not reaching the imaginative heights of the best.