A clash of dates meant taking time out from the Lieder Festival to attend Aida, the most recent opera ‘Live from the Met in HD’ at the Phoenix. It was an experience not to be missed. The opportunity to see one of the most spectacular of all operas in direct transmission was eagerly anticipated. The event proved different. It was not the spectacle of the triumphal scene, great though this was, but seeing in close up the working out of the drama through the interaction of the three principals Aida, Radamés and Amneris which left the strongest impression. 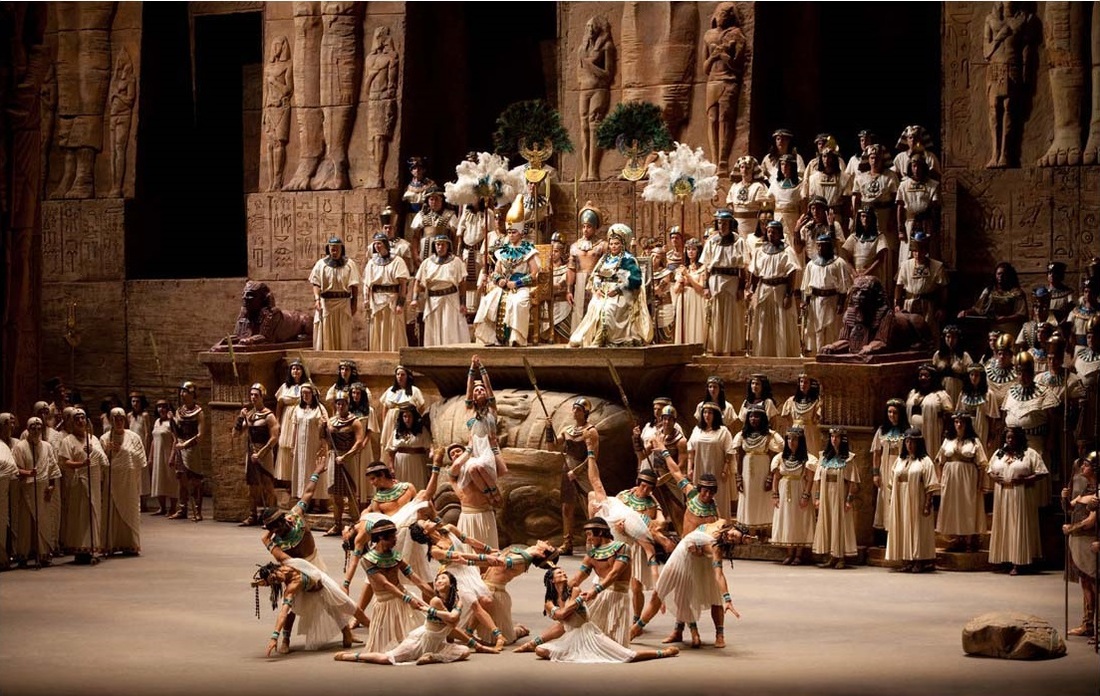 The triumphal scene in Verdi’s “Aida”
Photo: Ken Howard/Metropolitan Opera
Dating from 1988, it was a traditional, unashamedly old-fashioned production with opera singers of traditional build, appearance and voice who moved around the stage in stately fashion like pieces on a giant chess board. There was no resemblance at all to the present generation of stars, the Netrebko’s, de Niese’s and Dessay’s.

This contrast was emphasised in the interval when, for the cinema audience, Renée Fleming interviewed the stars. There was an astonishing moment when Fleming, dwarfed by Dolora Zajick as Amneris, referred to an occasion when she had been the Aida and received a demolishing look as if they were both still playing these roles.

Radamés was sung by Johan Botha (recently heard at ROH as a great Lohengrin). He revealed, in interview, that he sang Verdi roles in order to keep in training for Wagner! The trio was completed by Violeta Urmana as Aida. Carlo Guelfi sang Amonasro, her father and Roberto Scandiuzzi the high priest Ramfis.

Musically and vocally it was stupendous, under the baton of Daniele Gatti. In the cinema it came over with the intimacy of a chamber opera within a setting of court pomp and circumstance and war (as was also pointed out in interview). Somehow, in close-up, the singers conveyed their emotions visually through their facial expressions, as well as by superb singing.

Appreciation of the spectacle, in contrast, took us out of involvement in the action. Seeing the clockwork precision of the scene changes, moving around the immense blocks of the sets left us in awe of the production team as did the handling of the large crowds of extras (three of whom were also interviewed in the interval).

Only the choreography of Alexei Ratmansky was new and here again the cinema audience was well-served by the imaginative overhead camera work. It was a different and, one is tempted to say, almost a richer experience than seeing it in the theatre; the ‘buzz’ of being present in the auditorium is replaced by the feeling of sharing a common experience with a world-wide cinema audience

Technically the HD was perfect apart from one small sound blip, yet another tremendous triumph for the Met. We must be grateful to Bloomberg for their sponsorship; we would be even more grateful if we were spared their commercial, tasteful though this was.