The grandest of all!

I first saw Don Carlos (as the opera is known in English and French) in a Welsh National Opera production in 1973 which is indelibly stamped on my memory as an operatic experience of a lifetime both musically and visually. But this memory is almost (though not entirely) effaced by this co-production with Covent Garden (in 2009 and recently seen in transmission by BBC TV with much the same cast) and Norwegian National Opera, now at New York Metropolitan and seen in Oxford in HD transmission. 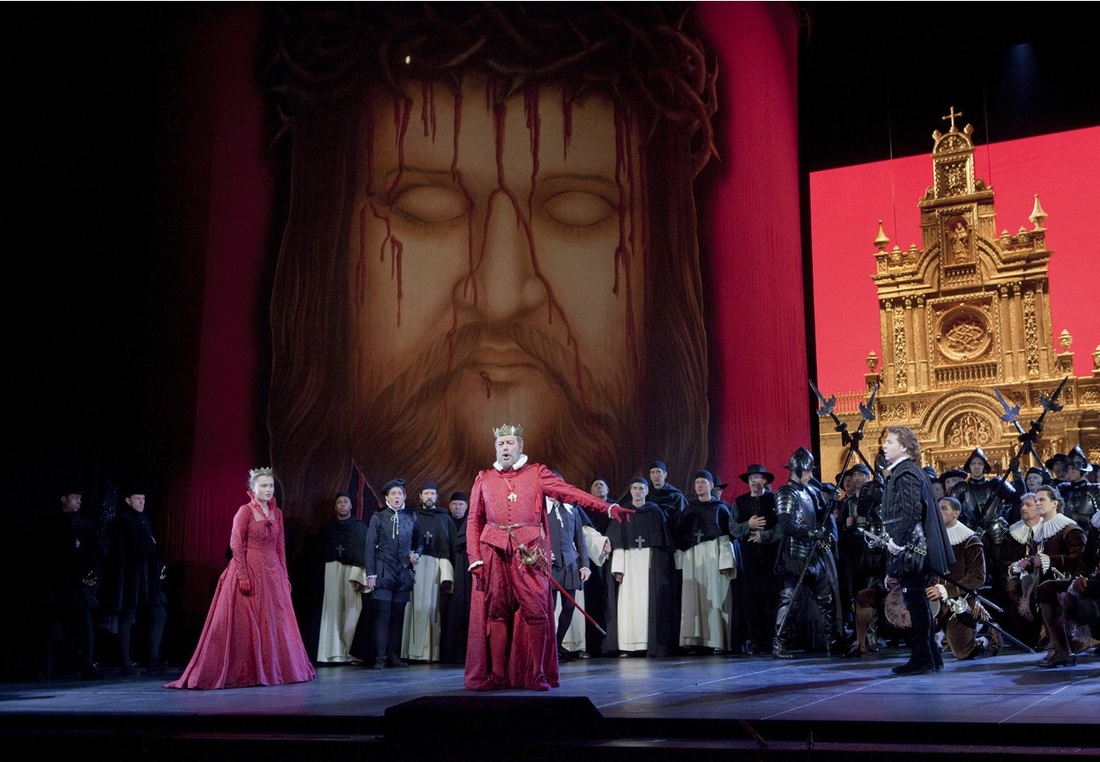 A scene from Verdi’s “Don Carlo” with Marina Poplavskaya as Elizabeth of Valois, Ferruccio Furlanetto as Philip II, and Roberto Alagna in the title role
Photo: Ken Howard/Metropolitan Opera
The grandtness of the opera stems from its provision of music worthy of its complex theme of the intricate drama of six principal characters worked out against the ever present background of the subjugation of the people of Flanders and the power of the Catholic Church in the form of the Spanish Inquisition.

Don Carlo, having fallen in love at first sight with Princess Elisabeth de Valois, to whom he is betrothed, at a chance meeting at Fontainebleau only to learn that she is now to marry his father King Philip henceforward to be torn between love and duty in an isolated existence at the Spanish Court. The lonely but despotic King has an ex-mistress Princess Eboli now in love with Carlo, turning to jealous revenge when she meets him in the garden in response to a letter he believes to be from Elisabeth. Rodrigo, Marquis of Posa a close friend of Carlo but whose main concern is the plight of the Flemish people attracts the suspicion of all and is finally assassinated by order of the Grand Inquisitor whose inflexible will dominates the proceedings. Carlo, imprisoned for threatening his father over the issue of Flanders, is saved from execution under the protection of the spirit of his grandfather Emperor Charles V.

Each character has the chance to express their motives and motivations in solo or duet to some of the best music in all of opera, winning some sympathy even for the wickedest. The only character to show no weakness, apart from the Inquisitor, is the irreproachable Elisabeth.

The opera exists in many versions, detailed in Julian Budden’s mammoth analysis The Operas of Verdi. Here we had a four and a half hour version with an abridged first act, in contrast to the two WNO productions we have seen in Oxford, the four hour version of 1973 (in English) omitting Act I, and the full five hour version in 2005  The production was by Nicholas Hytner with set and costume design by Bob Crowley.

The curtain rises on a beautiful stylised representation of winter in the forest where Carlo and Elisabeth meet (though she is not on horseback as in Verdi’s stage direction) but this standard of décor is not maintained. The second act has a red wall looking as if built from giant lego bricks. The garden scene where Carlo meets Eboli and the central auto-da-fé scene do nothing to efface the enduring images of WNO in 1973 where they were designed and stage-managed to perfection. I found it ludicrous to have the tomb of Charles V moved around on castors.

The singing is for the most part glorious. From his first notes Roberto Alagna as Carlo reminded us that it is not necessary for a good tenor to be able to act, charisma and voice conveying the emotions, but for the cinema audience this led to some unintentional humour in his duets with Elisabeth and with Eboli. However in HD the sensational performers were Simon Keenlyside as Rodrigo and Marina Poplavskaya as Elisabeth.

As I have remarked before, Keenlyside grows in stature in each successive appearance. Here he more than held his own with Alagna in their great duets, able to act to the camera. Poplavskaya has an impassive doll-like beauty, able to convey the deepest emotions with the slightest movement of her eyebrows supplementing her wonderful clear soprano voice. Ferruccio Furlanetto delivered Philip’s tormented monologue with great effect and Eric Halfverson was chilling as the Grand Inquisitor.

The one disappointment was Anna Smirnova who seemed uncomfortable in the role of Eboli, failing to convey the evolution from self-deception through vindictiveness to remorse of this complex character. Here we recalled the remarkable young Chinese mezzo Guang Yang who excelled in WNO’s 2005 production.

The opera was conducted in true Verdian style by Canadian Yannick Nézet-Séguin.

This was a performance which, while not without blemish, did full justice to this grandest of grand operas. For once the HD presentation was unobtrusive (though not without the occasional technical blip) giving the cinema audience a real feeling of being present in the auditorium, more than usual adding their spontaneous applause to that of the Met audience. A great experience.