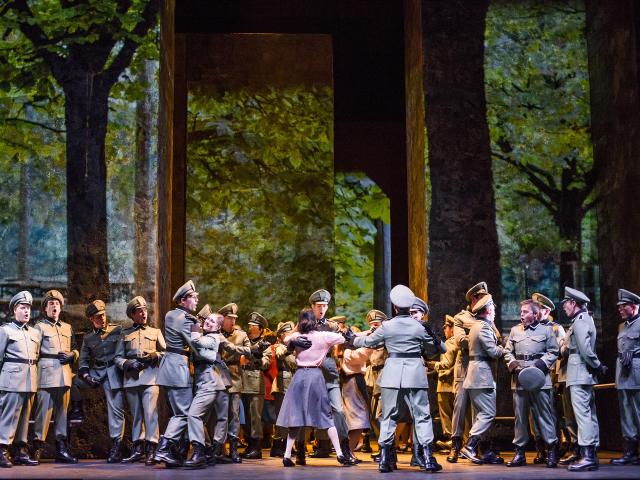 Poliuto, Glyndebourne Festival 2015. Glyndebourne Chorus. Photographer: Tristam Kenton
Unexpectedly finding myself at Glyndebourne on 21 June, I had little time to prepare myself for the experience of a performance of Donizetti’s opera Poliuto receiving its first ever British production, though according to one source it is quite often performed elsewhere. Composed in 1838, it received its first performance in Paris in 1840 in a revised version. Nowadays it is usually given in the original version. Based on a play by Corneille it recounts the story of a Christian martyr Poliuto, his wife Paolina and her former Roman lover Severo in the setting of the persecution and condemnation to death of Christians by Roman conquerors of Armenia between 257 and 259 AD. Paolina’s father, Felice the governor of Armenia has persuaded her to marry Poliuto, falsely telling her of Severo’s death in battle. The real baddie is Callistene, high priest of Jupiter, who arranges for Poliuto to overhear a reunion of Paolina and Severo. She remains faithful to her husband and goes with him to death together with Nearco, leader of the Christians, the confidant and mentor of Poliuto.

The knowledgeable reader will see that this is a gender-inverted version of Handel’s great dramatic oratorio Theodora with Poliuto-Theodora, Paolina – Didymus, Nearco – Irene with Callistene for Valerus. Would the opera Poliuto stand comparison in any way with the oratorio Theodora? It did not.

After a balmy afternoon enjoying smoked salmon sandwiches and champagne we took our seats for the first two acts during which I posed to myself the usual question ‘Am I enjoying this?’. On this occasion the answer was a definite ‘No’. Most of the singing was fantastically good and the orchestra, the London Philharmonic under Enrique Mazzola good too (though lacking the precision of our Welsh National Opera orchestra).but these could save neither the opera nor the production. Could this be the Donizetti of Anna Bolena, Maria Stuarda, Lucia di Lammermoor (to mention but three). The plot was there but where the drama, the theatricality? Vocally it is unbalanced, having only one female role. Paolina is the most interesting character with a real emotional and spiritual dilemma but this is not developed in the opera.

The direction by Mariame Clément is a heavy -handed attempt to emphasise the contemporary relevance of the plot by dressing the soldiery in modern grey uniforms and caps and the populace in modern dress. The set design by Julia Hansen consists of a number of heavy square pillars moving around the stage to reveal the comings and goings of the characters and of the chorus in a manner ill-matched to the music. Lighting is dim, which seems to be a common trend these days

In spite of all, the singers triumph. The tenor Emanuele D’Aguanno as Nearco, tenor Timothy Robinson as Felice and bass Matthew Rose as Callistene are excellent in the minor character roles. On vocal grounds alone, Paolina, Ana Maria Martinez, would have difficulty in choosing between baritone Igor Golovatenko as Severo and tenor Michael Fabiano as Poliuto; both had tremendous voices but it is the tenor which stays in the mind. Martinez’ depiction of Paolina coming to her decision which dominates the final act is the other abiding memory.