Before the rise of the curtain on this performance of Nixon in China, the cinema audience was again treated to the view of the Met auditorium filling up with their matinee audience. On this occasion we had a full-frontal view of the stalls from the stage which gave an uncanny feeling of being a mirror image with regard to age distribution and informality of dress of the Phoenix audience, except that the seats were red not blue. The HD presentation was introduced by Thomas Hampson, host for the evening, telling us that this was the most important opera written by an American in a quarter of a century. 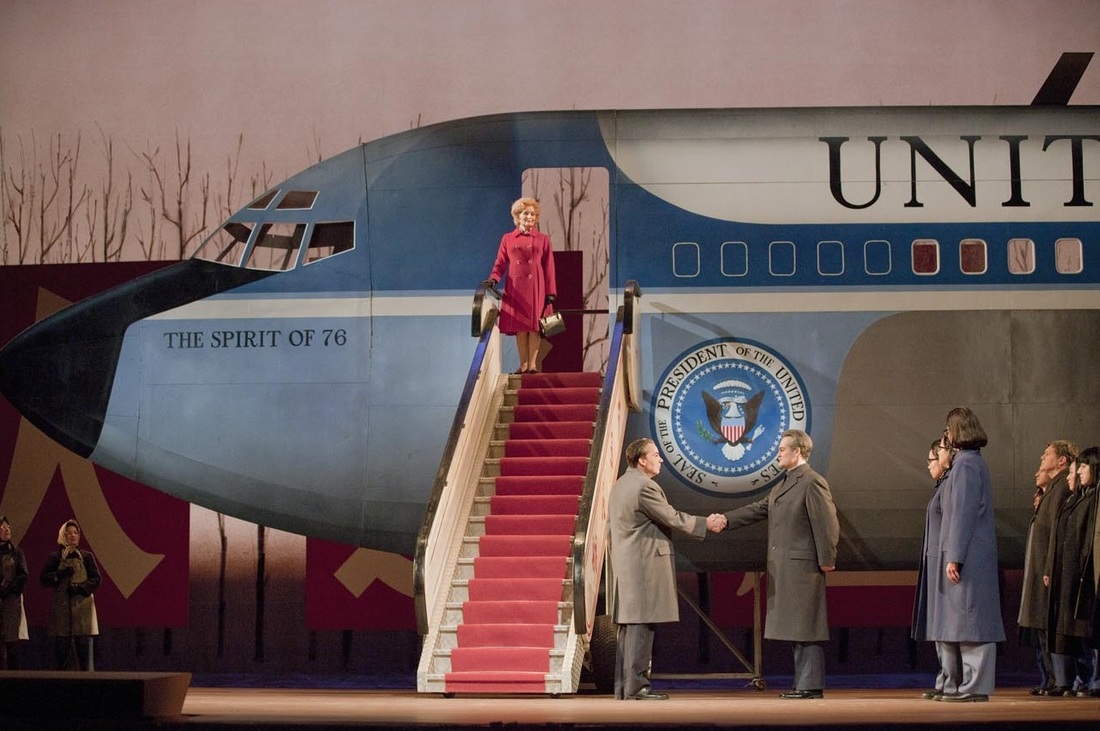 A scene from Act I of Adam’s “Nixon in China” with Janis Kelly as Pat Nixon, James Maddalena as Richard Nixon, Russell Brown as Chou En-lai
Photo: Ken Howard/Metropolitan Opera
One wondered why, then, it had had to wait twenty-four years for its Met premier since its Houston debut in 1987. In fact this was an English National Opera production, directed by Peter Sellars, first seen in London with much the same production team and cast in 2000 and revived in 2006. It had originally been planned that it should reopen the London Coliseum in 2002 following its renovation but this was cancelled due to late completion of the building work. It was replaced by an unsuccessful one-act version.

In an intermission interview, Sellars, of eccentric appearance, claimed that the concept of a modern opera based on a modern event of historical significance was his, that in 1983 he chose to put the idea to composer John Adams and librettist Alice Goodman and that the opera resulted from a close collaboration between the three of them. The result must be regarded as one of the leading operatic masterpieces of the second half of the twentieth century, up there with the works of my hero Harrison Birtwistle.

Adams is, of course, known as a leader of the minimalist school of composition which burst upon the musical scene in the middle of the nineteen-sixties. His music is characterised by a moving ground of shifting chords and harmonies on which is superposed snatches of lyrical melody. In this his style may be distinguished from that of fellow minimalist Philip Glass who gets his effect mainly through the steady evolution in mood, urgency and tempo of a group of chords.

In prospect the idea of three and a half hours of Adams seemed daunting but in the event the music is totally absorbing, subtly exciting and a worthy accompaniment to the subject and the treatment of the drama. (The oft-quoted comment of the New York Times that ‘Mr Adams has done for the arpeggio what McDonald’s did for the hamburger ‘ may be amusing but it is wildly wide of the mark.)

The form of the opera will be familiar to anyone who has travelled abroad for business or professional reasons. The three Acts represent respectively the arrival, formal greetings and evening reception, the sight-seeing, shopping and local culture and the unwinding and stock-taking on both sides at the end of the visit.

Here the first depicts the arrival of Richard and Pat Nixon with Henry Kissinger by air in Air Force One, a meeting with an aged and infirm Chairman Mao and a party with many toasts. In the second, Mrs Nixon is on a shopping, sight-seeing mission, followed by the Nixons attending a ballet performance devised and directed by Chiang Ch’ing, Madame Mao, entitled The Red Detachment of Women at which the tensions between the cultures and ideologies emerge. In this a Kissinger doppelganger appears as the evil influence.

In the final act the characters pair off, the Nixons and the Tse-tungs to reflect on the personal and political past and future, Kissinger consoles himself with a secretary while Chou En-lai, alone, speculates on the outcome of the visit.

The plot is in the tradition of grand opera where the characters are no closer to historical reality than the Don Carlos of Schiller or the Boris Godunov of Pushkin. What it lacks is a passionate love interest.

Before considering the strengths of the performance let us comment on some of the weaknesses apparent in its presentation to the cinema audience. The curtain goes up on the reception party awaiting the arrival of the Nixon’s aeroplane. The cinema director (in this case Sellars himself) makes the usual mistake of thinking he can add ‘significance’ for his audience by scanning the crowd in close up. We do not get a Chinese crowd but only the faces of the Met chorus now familiar from earlier operas. Another close up disaster is filming Chou En-lai from below so that we are fascinated by the motion of his Adam’s apple, distracting from what he is singing about.

There are other minor irritants. The plane arrives vertically like a helicopter rather than taxiing. Pat Nixon has no opportunity to change her clothes before attending the evening reception; Mao’s three secretaries adopt the exaggerated stylised hand and arm movement, Sellar’s trademark seen before in his Glyndebourne Theodora. Subtitles in English for an opera sung in English are a mixed blessing. On this occasion we were reminded of Harrison Birtwistle’s reply in a radio interview in connection with The Second Mrs Kong (which notoriously upset his librettist) that it was important the audience understood some of the words, got the gist of more and the rest did not matter.

The performance itself was remarkable, each singer giving a strong interpretation. James Maddalena (who created the role in 1987 and has sung it many times since) and Janis Kelly (in the first ENO production) gave a convincing picture of the presidential pair, their outward authority hiding their inner insecurities. They inhabited the roles so well that they appeared to carry them over into their intermission interviews!

Robert Brubaker (also from ENO) was authoritative as the aging and infirm Mao Tse-tung, perplexingly rejuvenated in Act III. Kathleen Kim gave a chilling portrayal of Chiang Ch’ing, presenting the ballet, brilliantly choreographed (originally for ENO) by Mark Morris with principal dancers Haruno Yamazaki and Kanji Segawa. Russell Braun played Chou En-lai as a sympathetic, ailing and lonely figure – perhaps least ‘true’ to history. Henry Kissinger was played as a buffo character by Richard Paul Fink, maybe a weakness of the opera that this was not a stronger role.

The opera was conducted by the composer in a reading which was totally gripping from beginning to end, leaving no doubt as to its stature. In my view it overshadows Adams’ more recent opera Doctor Atomic in another ENO-Met co-production seen at the London Coliseum in 2009. Time will tell whether this judgement is correct.