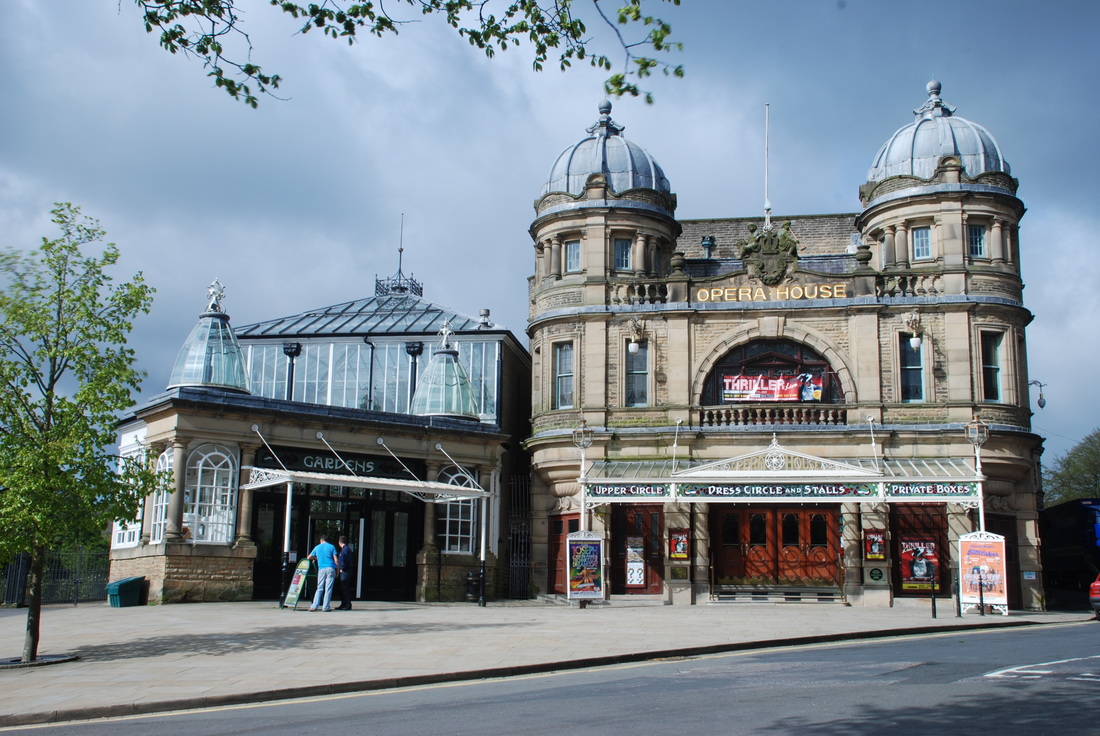 Photo: Rob Bendall
Having survived chaotic traffic delays at the M1-M69 interchange to reach Nottingham for bed and breakfast, I was able to make a long overdue first visit to the Buxton Festival, albeit for a fleeting visit, to see just one opera, the ‘Early Verdi’ Giovanna d’Arco. After a comfortable afternoon drive to Buxton we arrived in good time to consume a generous full afternoon tea at No 6 The Square a convenient tea shop opposite the Opera House.

The Buxton Festival has its roots as far back as 1936 but was restored to its present format in 1979. It is now established as a major summer cultural event of world-wide renown. While centred around the performance of three or four operas, the Festival contains much else of music, art, literature and politics over a period of more than two weeks in July. There is also a lively Fringe. This year the operas were Verdi, Giovanna d’Arco, Donizetti, Lucia di Lammermoor, Charpentier’s tear-jerker Louise (an opera I saw in the ruins of Munich just after the war with Hans Hotter and a chorus of buxom Bavarian wenches trying to emulate Parisian midinettes); the fourth opera was Purcell’s Dido and Aeneas with the English Concert.

The 900-seat Opera House was built in 1903. It was designed by Frank Matcham who also designed the London Coliseum, built one year later. It is a gem. The auditorium is in a warm deep blue, as was that of the Coliseum before the special atmosphere was ruined by changing it to red at the most recent redecoration. The seats are not fully padded but comfortable with leg-room. The whole ambience is one of elegance and welcome. Translations of the text are shown on screens either side of the stage so that one does not have to raise one’s eyes missing action on the stage as is usual.

Giovanna d’Arco is one of Verdi’s early operas, most of which deal with the struggles for independence of oppressed people, all symbolic of battles for Italian unification throwing off the influence of Austria. It is his seventh opera, first performed in 1845, between Nabucco (1842), his third, and Macbeth (1847) his tenth. The story of Joan of Arc is different from that told in England and France, being based on a version popularised by Schiller and used by Verdi’s librettist Solero. In the opera the three main characters are Giovanna, daughter of the shepherd Giacomo, and Carlo, uncrowned and later crowned king of France with whom she falls in love against the background of war between the English and the French. Giovanna is inspired by divine voices to rally the French against the English and to crown Carlo. However, Giacomo believes the angels to be devils and denounces his own daughter as a sorceress. Giovanna is condemned to be burnt at the stake but escapes to lead the troops in a final battle against the English. Reconciled with her father she succumbs to wounds sustained during the battle.

For me, the performance did not get off to a good start. The curtain rose on the set looking into the angle between two tall black walls. Giovanna is seen seated on the ground then moving to a prie-Dieu. She is wearing a calf-length blue dress and pinafore reminding us of Judy Garland as Dorothy in The Wizard of Oz to the extent that I expected to see a small dog and red shoes. Angels and demons appear in turn at the top of the walls. A demoralised Carlo arrives with members of his army. He seems to combine the lack of heart, brain and courage of Dorothy’s three companions from Oz until rallied by Giovanna, inspired by her visions. Her father, Giacomo overhearing her voices concludes she is possessed by devils and denounces her

In watching this one is conscious of two things. Yet once again (as in Glyndebourne’s Rape of Lucretia and so many recent WNO productions)  the production is almost ruined by the lighting designer who I name and shame as Malcolm Rippeth. From where I was sitting the lighting is so dim on the lower stage that it is almost impossible to see what is going on. This is compounded in the last scene by a spotlight shining straight at the audience. The other problem is the small stage, crowded with three or four chorus members, it gives a feeling of claustrophobia despite a mirror set in one of the walls to give an illusion of space.

It is against these odds that, from near the end of Act 1, Verdi, the singers and musicians triumph, once one has accepted the small scale nature of the production with the Buxton Festival Chorus of twenty-four and the Northern Chamber Orchestra of forty-four players. The Director is the vastly experienced veteran Verdi specialist Elijah Moshinski. Against the background of chorus and orchestra depicting the battles and supernatural appearances, the drama is played out between the three principals, Giovanna, portrayed by Australian soprano Kate Ladner, Carlo by tenor Ben Johnson and Giacomo by baritone Devid Cecconi. They all produced some fine moments but one remembers best the love duet between Giovanna and Carlo and the most moving final duet of reconciliation and forgiveness between father and daughter. Outstanding was the commanding voice and presence of Cecconi. Johnson, the tenor, rapidly making a name as a Lieder singer after winning the audience prize at Cardiff Singer of the World in 2013, has yet to learn how to act. Ladner has a good voice but is a little uneven in delivery.

This first visit to Buxton certainly gave an appetite for a more extended visit next year.