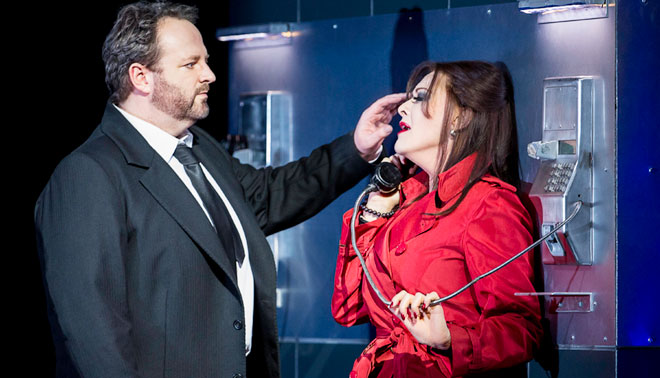 The essence of opera is the unification of orchestral music, libretto and staging to set the mood and atmosphere in support of the voices of singers relating the story through their characterisation of their roles (as well as through the surtitles these days). The greatest directors of opera (like Peter Stein) have this clearly in mind in designing their productions  The worst always put themselves first in imposing their own agenda but even some good directors are sometimes led astray by some ‘idea’ taking over the staging, losing sight of the prime objective. Such productions stay in the memory of audiences as visual experiences overwhelming the musical and vocal performance. I shall not shirk from naming and shaming starting with the present Chief Executive and Artistic Director of WNO David Pountney. In 2006 he directed Der Fliegende Hooländer for the opening of the Wales Millennium Centre from which the lasting memory of absurd video blow-ups of the singers eclipsed the singing of Bryn Terfel. Other horrors include Graham Vick who went off the rails during his time at Glyndebourne particularly with Don Giovanni of which the main memory is a dead horse on a dung heap (and yet was capable of a masterly Meistersinger which stood the test of time at Covent Garden for many years) and Peter Sellars, more renowned for the arm-waving distractions of his Theodora than for an Idomeneo in which the power of the music overcame the idiosyncrasies of the production. Another recent and expensive misjudgement was The New York Met’s elaborate staging of Wagner’s Ring Cycle by Robert Lepage which was a redundant distraction divorced from the unfolding of the drama.


These reflections are prompted by a new WNO co-production with Opera Narodowa Warsaw and the Théâtre de la Monnaie Brussels with the Polish Director Mariusz Treliński. Puccini’s Manon Lescaut, with La Traviata and Hans Werner Henze’s Boulevard Solitude, a modern version of the Manon story, formed WNO’s group of ‘Fallen Women’ Operas under its new themed programming regime. Manon Lescaut is based on the short novel by Abbé Prévost Histoire du Chevalier des Grieux et de Manon Lescaut. Set in the eighteenth century it tells of Manon flitting between a young but penniless lover des Grieux with whom she elopes on love at first sight and an elderly protector Geronte. Trying to get the best of both worlds she is caught nicking Geronte’s jewellery and sentenced to deportation to Louisiana. Des Grieux is allowed to travel with her but they die of thirst in the desert in attempting to escape. Puccini’s opera, dramatically weak for one with such theatrical sense, is in four set-piece Acts set in Amiens where the lovers meet, in Paris where they first part, in Le Havre where Manon awaits deportation in the company of other fallen women and in Louisiana where they die.

The Director of this production Mariusz Treliński, according to the programme biographies, graduated from the film-directing faculty of the Lódź Film School. On the basis of this production, it is unfortunate he never studied opera directing. His ‘inspiration ’seems to have been let since the plot involves travel (from Amiens to Paris to Le Havre to Louisiana) let us set it in the modern age of railway travel. Thus in Act One we are in a station waiting room looking out on the platform with video projection of trains coming and going. The penniless theology student des Grieux encounters Manon being escorted to a convent by her brother. They fall in love, unlikely, since des Grieux dressed in a shabby ill-fitting suit with unbuttoned collar above a loosely knotted tie has as much sex-appeal as a sack of potatoes. They take the train to Paris and Geronte’s salon, whence by prison train to Le Havre docks From there they appear to take another TGV train to Louisiana, reminding me of an occasion when crossing a desert in USA by car with NY number plates being asked ‘What part of New York we were from’. On hearing we were from England: ‘Did you drive all the way?’  In the last Act Louisiana is represented by a projected city-scape, where instead of the tender scene where the lovers together die of thirst, there is much stage business involving two doppelgangers of Manon.


The absurdities of the staging were so distracting that one barely noticed how well the orchestra was playing under Lothar Koenigs. The principal singers, Chiara Taigi as Manon, Gwyn Hughes Jones as Des Grieux and Stephen Richardson as Geronte were given no opportunity to develop their characters or their emotional interaction and so cannot be judged Whatever the director was trying to do maybe is hidden in the programme notes which it should not be necessary to read, so I haven’t. What comes over is a sort of Gallic Brief Encounter.