In writing about Donizetti’s Anna Bolena seen in HD transmission from the Met, I compared the experience with eavesdropping on a live performance in the Opera House. In complete contrast, Handel’s Rodelinda, seen in the Sunday encore transmission on 4th December came over visually as a near-perfect cinematic experience. 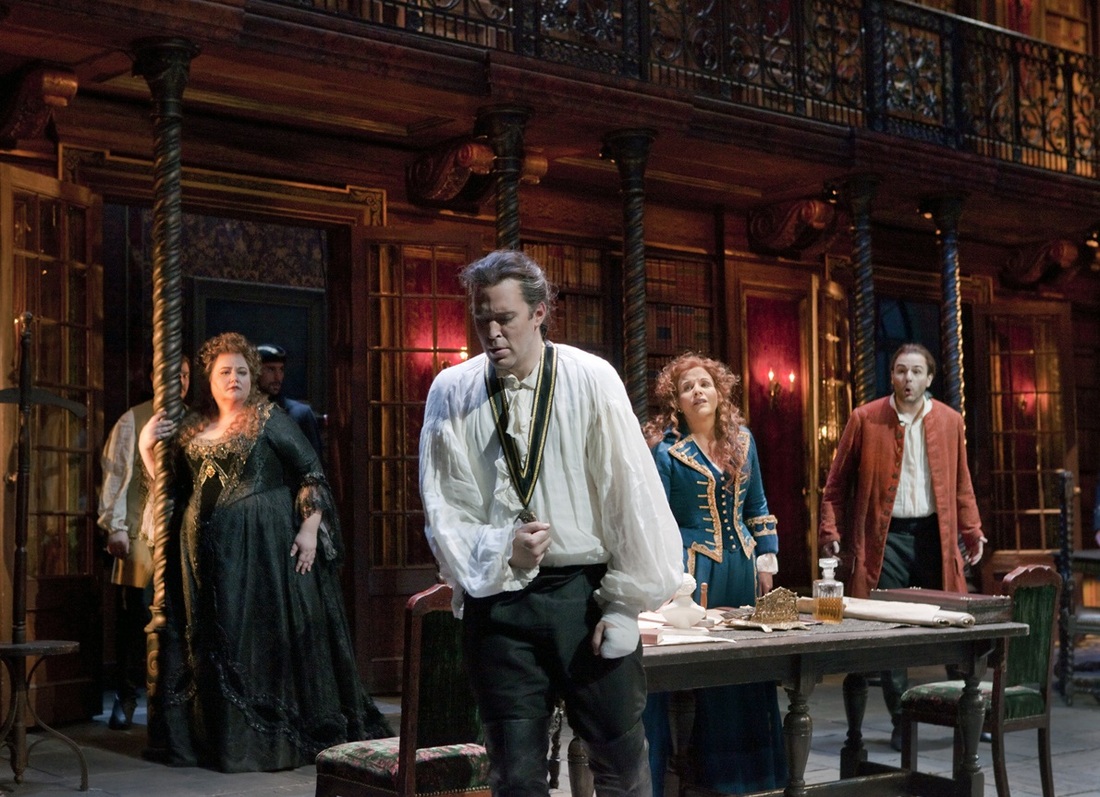 A scene from Handel’s “Rodelinda” with Stephanie Blythe as Eduige, Joseph Kaiser as Grimoalddo, Renee Fleming in the title role and Andreas Scholl as Bertarido
Photo: Ken Howard/Metropolitan Opera
Paradoxically, the reason for this (as explained in intermission interviews) is that the production exploited to the full the vast back-stage areas of the Theatre to build the scenery on movable platforms giving the illusion to the cinema audience of a single Hollywood stage set over which the camera roamed. The only minor give-away was that the stereo sound did not always appear to come from the right place.

Rodelinda has one of those baroque plots, perfectly clear in performance but almost impossible to summarise succinctly. I try: Bertarido, King of Lombardy, husband of Rodelinda, is missing presumed dead. Grimoaldo, egged on by a confidant Garibaldo, has usurped the throne but hopes to legitimise his position by marrying Rodelinda, threatening to kill her son Flavio if she does not consent. Bertarido returns, disguised, recognised only by his retainer Unulfo, and it is decided he will stay incognito to assess the situation, in particular Rodelinda’s fidelity. Eduige, Bertarido’s sister, a previous lover of Grimoaldo, is being wooed by Garibaldo but allies herself with Rodelinda. Rodelinda calls Grimoaldo’s bluff making it a condition that he kills Flavio himself. Bertarido is discovered by Grimoaldo, imprisoned but escapes with the aid of Eduige and Unulfo, who is wounded in the attempt. Grimoaldo undergoes a change of heart and is reconciled with Eduige. The King and Queen are reunited.

The remarkable thing about this opera as drama is that, with the exception of Garibaldo, the baddie, and  the goodie Unolfo, each character displays a conflict between head and heart often represented by the A and B sections of the ABA form of da capo aria. Rodelinda, by calculating she can call Grimoaldo’s bluff over the killing of  Flavio, Bertarido in resisting revealing himself to Rodelinda immediately, Grimoaldo’s ambition for the crown suppressing his love for Eduige and Eduige torn between jealousy and the friendship of  Rodelinda.

On paper this was a dream cast, with the Met’s own leading ladies Renée Fleming and Stephanie Blythe, both experienced performers before the HD cameras (the former supreme), playing Rodelinda and Eduige, two countertenors Andreas Scholl and Iestyn Davies as Bertarido and Unolfo respectively. We shall never forget Scholl’s appearance in the role at Glyndebourne in 1998, in that production, undoubtedly the star of the show, first appearing from the sea in commanding voice. On this occasion, however, Davies, well known to Oxford audiences, almost outshone Scholl with a firmer and steadier line.

The Canadian tenor Joseph Kaiser who sang well and performed convincingly as Grimoaldo, was not previously known to us but we recognised baritone Shenyang as Garibaldo, oozing malevolence, as the Chinese winner of the 2007 Cardiff Singer of the World, who on this evidence has exceeded  his operatic promise with a great stage presence.

The Conductor, Harry Bicket had trained the Met orchestra to produce a genuine baroque sound. The subtitles provided an excellent guide to the actions and emotions of the characters excepting for an unfortunate ‘I am alone with my misfortune’ from Rodelinda while embracing her son.

However, in performance there was one serious misjudgement:  using countertenors in castrato roles in competition with female voices of such calibre in the vast Met auditorium. Countertenors just do not have the lung capacity of the castrato, few (Scholl may be an exception but not on this evidence; Davies has the potential) can compete on star quality and stage personality with the leading divas. A beautiful voice is not enough in baroque opera. There were many countertenors in Handel’s time but they performed mainly sacred music, never on the operatic stage. I would like to see this production, within the baroque convention of gender-neutral casting, with Scholl and Blythe swapping roles; she at least has the lung capacity (if I may put it politely!).

For the HD audience Rodelinda was a ground breaking event. For the first time we could forget it was in an opera house and concentrate on the cinematic-operatic experience. The credit for this must go to the Producer Stephen Wadsworth, Set Designer Thomas Lynch and above all to Matthew Diamond making his debut as TV Director.

The production is truer to Handel’s impresario spirit than the ridiculous antics in last year’s Glyndebourne production of Rinaldo.  This is an exciting new medium for the presentation of baroque opera. It deserves a name – hence my title ‘Ciné-opera’.