An invaluable guide for those interested in writing about opera is the Bloomsbury Dictionary of Opera and Operetta by James Anderson. In particular it lists operas based on the works of the great writers and dramatists. From it we learn that there are nearly two hundred operas based on the works of Shakespeare, more than half of which are by composers with entries in the dictionary. Of these only two match the genius of the originals: Verdi’s final masterpieces Falstaff and Otello, in which the adaptation is complete and unsurpassed. There follow surprisingly few which are great operas in their own right, inspired by the original dramas and with solid place in the repertoire. There are not too many to list here. 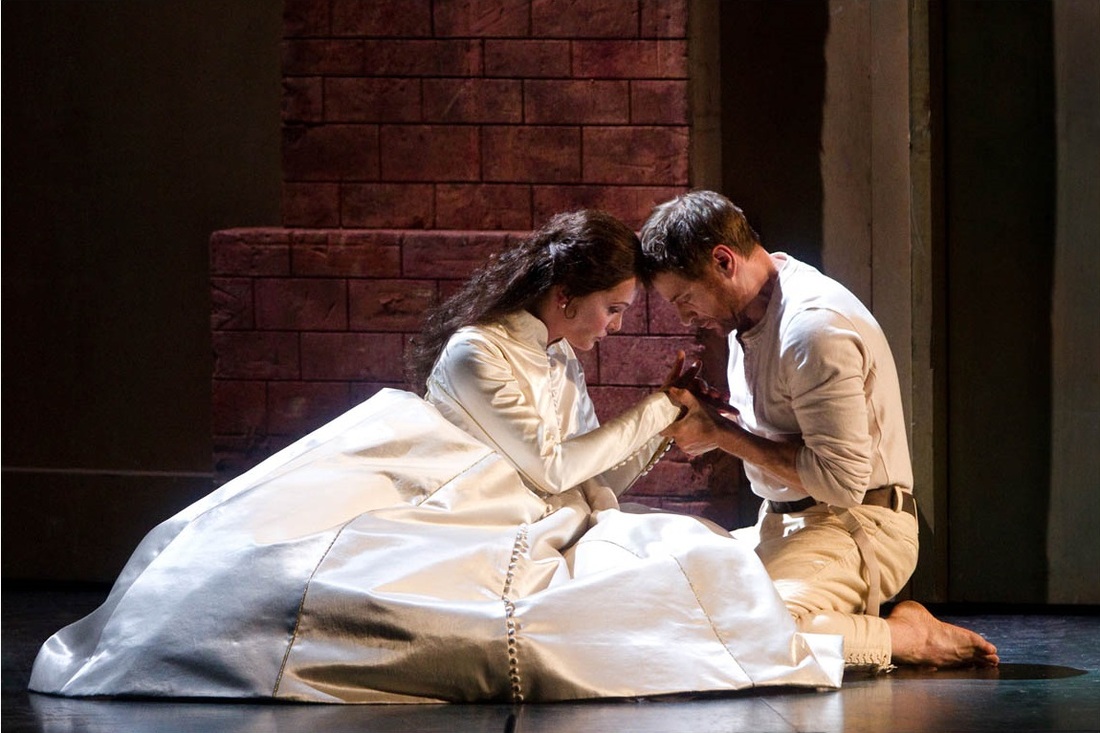 Marlis Peterson as Ophelie and Simon Keenlyside in the title role of Thomas’s “Hamlet”
Photo: Marty Sohl/Metropolitan Opera
Also by Verdi is Macbeth, an early work; Romeo and Juliet with settings by Bellini and by Gounod, A Midsummer Night’s Dream by Benjamin Britten, and Béatrice et Bénédict by Hector Berlioz based on Much Ado about Nothing and most recent Thomas Adès’ The Tempest. Also worthy of mention though less frequently performed: Nicolai’s version of The Merry Wives of Windsor,  Rossini’s Otello, Purcell’s Fairy Queen and The Tempest and Wagner’s early Das Liebesverbot  based on Measure for Measure (aka Die Novize di Palermo did you know?).

One could add for good measure the musicals Kiss me Kate and West Side Story (the former has played at the Wiener Volksoper as Küss Mich Kätchen). As for Hamlet, there are six versions recorded in the loc cit, by Mercadante, Faccio, Thomas (the subject of this review), Zafred, Humphrey Searle and Szokolay.

Ambroise Thomas who lived from 1811 to 1896 wrote twenty operas of which the only two at all well-known are Mignon (1866) and Hamlet (1868). Despite or because of commercial success he was not held in high regard by fellow musicians. It has been said of his music: ‘there are three types of music, good, bad and by Ambroise Thomas’ which I have seen attributed both to Berlioz and to Chabrier (the latter perhaps the more plausible). This, on the evidence of the performance of Hamlet under review, is not wide of the mark. But why single out Thomas? He is not untypical of his period. There is much nineteenth century French music to which the remark could apply!

The music is highly tuneful, flattering to the singers’ voices and easy on the ear of the audience; the problem is that for the most part it is totally unrelated to the drama and the expressed sentiments. The opera is a late example of French Grand Opéra, already slightly old hat, appearing the same year as Die Meistersinger von Nürnberg on one hand and Offenbach’s La Vie Parisienne on the other.

This production, from the Grand Théâtre de Gèneve is directed by Patrice Caurier and Moshe Leiser, well known for their many inspired Welsh National Opera productions (as well as one or two near disasters). Here they choose to work within a bare set, in order, they say, to concentrate on the inner emotions of the characters, apart from a long table in the banquet scene and a realistic grave for Ophélie at the end. This, in my opinion, is a misjudgement (one cannot believe dictated by reasons of economy). Grand Opéra is not known for complexity of emotions but it does cry out for spectacle. It should be set where it belongs – in the grounds and Grand Hall of Elsinore Castle.

Furthermore the production destroys Ophélie’s suicide scene. This is the climax of the opera and is supposed to stand comparison with the ‘mad scene’ in Lucia di Lammermoor not emulate it. It is worth quoting one account of the scenario of her romantic suicide by drowning: she sings a Swedish song of sirens to the village maidens and when they leave her is enticed by a siren into the water floating out on the waves as her voice dies away. Instead we have her standing centre stage bloodily cutting herself with a knife in imitation of modern day Lucia’s. Beautifully as it was sung by Marlis Petersen, this was an unwarranted directorial intervention. For the rest, the opera is based on the set-piece scenes of the play with recognisable French translations of the familiar quotations.

Simon Keenlyside as Hamlet dominates as both singer and actor. He is a performer who grows in stature each time he appears. One is confident he could give a creditable interpretation of the role in the Shakespeare play. His trademark is the athleticism he brings to his performances, here manifested in a scene in which he feigns madness to hide his indecision following the denouement of the players’ depiction of Gonzago’s murder; he writhes on the banquet table dowsing himself in red wine. This was a remarkable coup de théâtre, if in retrospect and in description it appears rather ridiculous.

There are almost as many versions of the ending of the opera as there are plot synopses in the reference works. The original seems to be to have the ghost appearing for the last time, demanding Claudius’ death, following which Hamlet is pronounced king. Elsewhere we read ‘the audience in German theatres is spared this last piece of absurdity and the play is brought to a more appropriate close by Hamlet stabbing himself on his bride’s bier’. In this production, Laërte stabs Hamlet who kills Claudius before himself dying, also differing from the cinema handout.

The singing was great. Particular credit goes to Petersen who replaced Nancy Dessay at the last minute, immediately following an engagement in Vienna creating the role of Medea in a new opera by Aribert Reimann, so that her initial preparation had to be conducted with the aid of Skype. Gertrude was well sung by Jennifer Larmore, though the camera was not flattering to her acting skill. The tenor Toby Spence, who studied music as choral scholar at New College, impressed as Laërte; the veteran James Morris played Claudius with his usual authority, though perhaps not in top vocal form as he was recently in Simon Boccanegra (OM No.297). Credit also to David Pittsinger as an awe-inspiring ghost.

The performance was conducted with exuberance and appropriate panache by Louis Langrée. As usual one must give recognition to the ‘TV Director’ responsible for the impeccable transmission, on this occasion Brian Large.