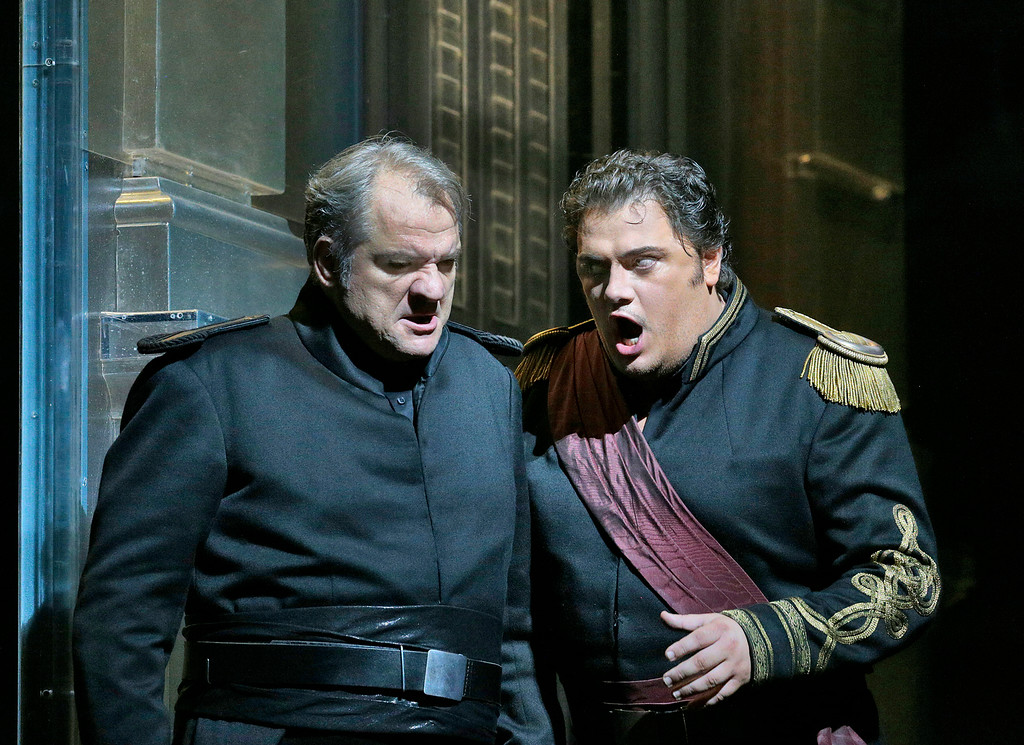 Željko Lučić as Iago and Aleksandrs Antonenko in the title role of Verdi's "Otello". Photographed by Ken Howard/ Metropolitan Opera

This, the eighty-ninth opera transmitted in HD from the New York Metropolitan since the start ten years ago and my forty-fifth review, was a complete contrast to Il Trovatore. Whereas that was clearly a filmed stage production, Otello was pure ciné-opera – the cinema audience was completely unaware that this was other than a cinematic experience. In a rare intermission interview, Gary Halvarson, demonstrated how the illusion was created.
Any production of Otello has to stand comparison with the most perfect operatic experience of my life, that of Welch National Opera in 1986. The quartet of the Director Peter Stein and the three principals Geoffrey Lawton in the title role, Donald Maxwell as Iago and Helen field Desdemona backed by WNO chorus and orchestra, conducted by Davis Armstrong. Stein’s direction, his first for WNO, was choreographed throughout n total sympathy with the music. From the opening notes of the storm and Otello’s return to Cyprus, through the interactions of the characters as the drama tightened to the final scene between Desdemona and Otello. In a daringly imaginative scene, Field sang the Willow Song with her back to the audience, combing her hair in a mirror. Other productions have done fair justice to the creation of Verdi and Boito but none to compare with Peter Stein.
So how did The Met’s production by Bartlett Sher rate? There was some fine singing and glorious orchestral sound but in many ways it was a very strange production. It started with a storm represented by billowing clouds but, as I have claimed before, the stage- filling chorus is much too large to make any dramatic statement. A white Otello arrives, surprisingly un-windswept, showing we are still in the world of politically correct colour- blindness. In the age of a coloured USA President this comes over oddly as inverse racism. Otello (Aleksandrs Antonenko) is greeted by Desdemona (Sonya Yoncheva) while Iago (Željko Lučić) sets his scheme in motion manipulating Cassio Dimitri Pittas) and Rodrigo (Chad Shelton). This presents the next problem. Otello and Iago are so alike in appearance, distinguished only by Otello’s uniform, that one wonders if it is the director’s intention that they should represent two halves of a single character. An explanation of this feeling is revealed in an intermission interview that this is the last performance in a run of eight but they have sung together so many times that they know each other’s part inside out. Also in an intermission interview Yoncheva says that she sees Desdemona as basically a strong woman. It is a pity that she was not able to convey this to the audience until the last Act.
The set design of Es Devlin is an utter disaster. It consists of large display cases, external walls and other blocks of scenery moving around the whole time. He must have been desperate to dream up that, which added nothing to the drama. Fortunately, due to the power of the music and concentration on close-ups of the singers and the performance, it was possible for the cinema audience .to ignore the staging.
The conductor was the young Yannick Nézet-Séguin, with complete mastery of the score, gripping the attention as the plot wound to its inexorable conclusion. The final scene was as emotionally draining as I have ever experienced it.