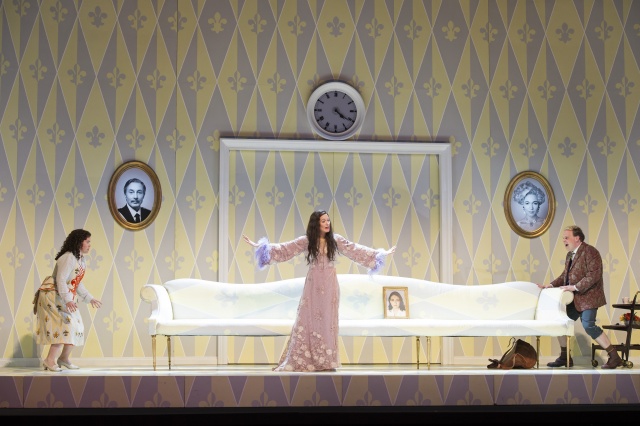 The last time I wrote about der Rosenkavalier, I gave a double review comparing two venerable productions at the Royal Opera House, Covent Garden and The New York Metropolitan seen in live cinema transmission. Taking these experiences together with the definitive 1957 LP recording with Elizabeth Schwarzkopf, Christa Ludwig and Teresa Stitch-Randall gave immutable proof of the opera as a jointly brilliant creation of Strauss and his librettist Hugo von Hofmannssthal with detailed stage directions giving little freedom of action to a conscientious director. This new production for Glyndebourne directed by Richard Jones breaks with tradition, setting the opera in modern times. This brings out the universality of its themes, especially in relevance to concerns of today and to the synergy with mid-eighteenth century culture, recently the focus of BBC coverage. One theme is the ending of a love affair between the thirty-five year old wife of an absent Field Marshall ( the Marschallin) and a young aristocrat Octavian half her age who falls for the daughter Sophie of a wealthy parvenu von Faninal. The other theme is the arranged marriage between Sophie and the boorish Baron Ochs, a cousin of the Marshall’s wife of her age who have never met. Octavian is chosen for the traditional role (of 1740 Vienna) of delivering a silver rose to Sophie from Ochs as a token of their betrothal.

The break with tradition is immediate. The production opens with the 21st century Marschallin taking a languorous shower after a night of passion, instead of following the stage direction: ‘Her face is not seen, only her very beautiful hand and the arm revealed by her lace nightgown’. This scene introduced Kate Royal presenting the private side of the Marschallin in a bravely truthful depiction. Irish mezzo Tara Erraught is the chubby teenage lover Octavian. Her appearance had attracted adverse comment from some elderly male critics thinking to dictate the taste of a thirty-five year old’s amour. The idyll is interrupted by the arrival of Ochs, played by Lars Woldt, not, as often, as an elderly lecher, but as a self-styled Don Juan. There follows the Marchallin’s levée, presenting her dignified public persona, and filling the stage with the large cast of followers, hangers-on, petitioners and tradespeople. Octavian now appears disguised as a chambermaid Mariandel, attracting Ochs’ attentions. By this time we were sitting up in our seats realising this was a legitimate updating of the opera, lovingly conducted by Glyndebourne’s new young Music Director Robin Ticciati and performed by a uniformly fine cast. To some extent the stage is overcrowded making it difficult to appreciate the cameo roles while the bare wall-papered set and business with an over-long settee give the scene a surreal rather than comedy atmosphere. The poignant duet between the Marschallin and Octavian which closes Act One confirmed the quality of this production.

In Act Two, in Faninal’s House we meet Sophie, played by Theodora Gheorgiu, eagerly awaiting her betrothed but falling headlong for Octavian, arriving with the silver rose, their instant mutual attraction charmingly represented by their bodies swaying backwards and forwards. Ochs arrives with his boorish entourage and immediately makes himself objectionable by mounting Sophie on a table and examining her as if a prize calf. Outraged, Octavian pierces Ochs in the rump with the rose (rather than in the arm with a sword as usual). After medical attention he is mollified by the promise of an assignation with Mariandel that evening.

Act Three proceeds along conventional lines, with Ochs attempts to seduce Mariandel continually interrupted by appearances of wives, children, creditors and police until the arrival of Sophie, Faninal and the Marschallin who restores order. She resolves her personal life by ceding Octavian to Sophie. The performance comes to its poignant end with a beautifully balanced trio. But this is a comedy not a tragedy. Both in the eighteenth and twenty-first centuries, Ochs will not be reformed, this will not be the Marschallin’s last affaire and Octavian and Sophie will each need to keep a close eye on the other!

This production gives great credit to all, from Director Richard Jones to the Marschallin’s servant, Mohammed but outstanding is Kate Royal. Young but not too young for the role she establishes herself as a strong contender to become the Marschallin of the next decade. 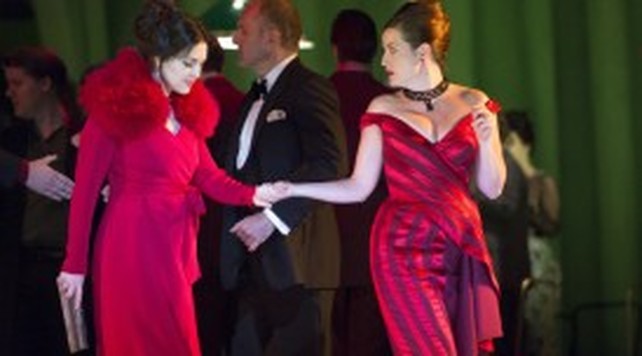 Popular operas are generally popular for a good reason, and this production shows clearly why La Traviata has been successful. There are (essentially) only three characters (and I confess to generally preferring works with lots going on, which really only occurs in the lively opening scene at the party) yet there are 3 stong performances from the leads, coupled with Mark Elder's light touch conducting (whilst keeping up a good pace), which made this a memorable performance. Alfredo (Michael Fabiano) was excellent, he both sung well and played the role with real feeling (it would be hard not to be moved by his reaction on returning to Violetta). Arguably, Violetta's role is easier to characterise (noble sacrifice), but Venera Gimadieva portrayed it well, demonstrating her (seemingly effortless) vocal range. The audience's applause at the curtain was greater for Gimadieva, but I  thought Fabiano shaded it.  Alfredo's father (Tassis Christoyannis) has all the potential to be a pantomime villain, asking the dying girl to give up her first and only true love so as not to spoil the wedding of her lover's sister who she has never met. The only surprise is Violetta agrees to this. Whilst one might argue that this strikes a modern audience as implausible, I wonder if it was so very different in the 1850s- part of Violetta's hold over our sympathies is the way she acquiesces to the request. Christoyannis looks the part, distinguished, grey, and sounds sincere in his cruel request. The clear baritone conveyed the genuineness and conviction of his demands woithout descending in to self-righteousness or pomopsity. The glib references to God's will, and loving both his children equally, would have sounded just as hollow on first night. The premiere was set in the 1700s (tales of courtesans being too shocking for a contemporary audience) but this production had modern (albeit formal) evening dress, and lacked nothing as a result. The set was a touch disappointing being very plain. The benefit of this being that there was nothing to distract from the singers, which is particularly helpful when you have the trio on stage singing independently but simultaneously. The last scene was particularly effective: Violetta turns, collapses centre stage, fade out. Simple-almost brutal- but striking. Film buffs might have recognised the scene from 'Pretty Woman' when Richard Gere takes Julia Roberts (the hooker) to see her first opera. So what will I remember? The outstanding Alfredo, three strong performances, an austere set and the final scene. Its why people go to the opera.....