Capriccio is Richard Strauss’ last opera, given its first performance in Munich in October 1942, just after the German army had launched its attack on Stalingrad, just before the battle of El Alamein. Much has been written about the composer’s relations with the Nazi regime, much of it inconclusive, but it is hard not to feel slightly uncomfortable about enjoying this entertaining piece of escapism when aware of the wartime background. 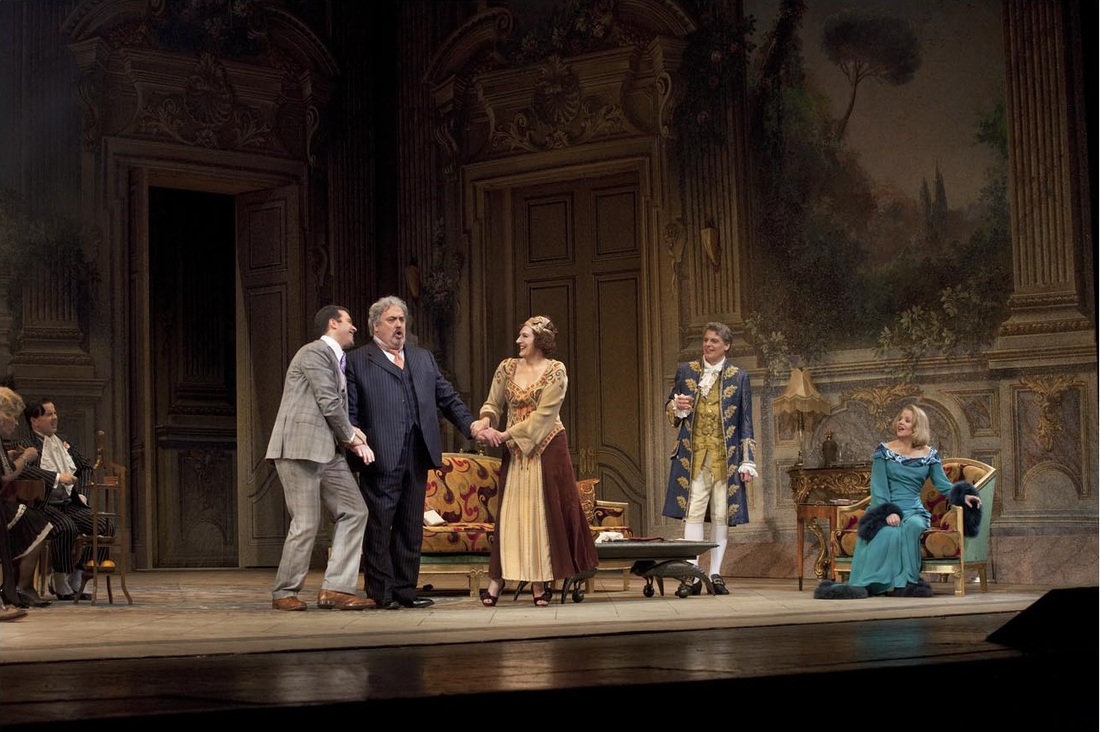 A scene from Strauss’s “Capriccio” with Joseph Kaiser as Flamand, Peter Rose as La Roche, Sarah Connolly as Clarion, Michael Devlin as the Major-Domo, and Renee Fleming as the Countess
Photo: Ken Howard/Metropolitan Opera
The opera, described as a ‘conversation piece for music’, is concerned with questions as old as opera itself of whether the words or the music come first, who is the more important the librettist or composer or, more broadly, the arts of poetry or music? The action takes place, according to the score, though not in this production, in a French chateau outside Paris around 1775 when the question was particularly burning, when Gluck was trying to reform opera, ending an era when the author of the text received top billing, giving rise to many musical settings with the composer taking second place. Indeed, the original inspiration for the work, brought to the composer’s attention by Stefan Zweig in 1934, was a libretto written by Giambattista Casti (1724-1803) entitled Prima la musica e poi le parole which was set to music by Salieri. The result of this long gestation has a libretto by Clemens Kraus, who conducted the first production. (His name does not appear on the hand-out for the cinema audience, which would seem to prejudge the question!)

The story centres on the inconclusive attempt of the Countess Madeleine, on the eve of her birthday, to choose between poetry and music, personified by two suitors, the poet Olivier and the composer Flamand. It is padded out by a series of characters illustrating various points in the argument: the Countess’ brother, would-be actor, enamoured of the actress Clairon, La Roche an impresario, preparing the evening’s entertainment, and a major-domo, M. Taupe a prompter, a pair of Italian singers and two dancers.

Musically, the beginning and end are divine: the overture is replaced by a string sextet, a pastiche of the period, which leads into the first scene of confrontation of Olivier and Flamand; the ending is a wistful twenty- minute soliloquy by the countess in which she explores her dilemma, concluding with the arrangement of assignations with both her suitors in the library at eleven o’clock the next morning.

In this production by John Cox the scene is purportedly set in ‘a chateau near Paris, the 1920s’ but the furniture is 19th century with a harpsichord rather than a grand piano and costumes which, while definitely twentieth century, span the decades in fashion. This transition in time makes nonsense of references to contemporary eighteenth century composers during the discourse.

One can, on this occasion, understand the Countess’ dilemma. There was little to distinguish the composer from the writer. It was constantly necessary to remind ourselves that Olivier (Russell Braun) was the one in the blue jacket, singing baritone, while Flamand (Joseph Kaiser), was the tenor wearing grey. Their argument lacked passion and animation. No wonder La Roche (Peter Rose) spent much of the first scene asleep; even asleep he managed to dominate the action as he continued to do in animatedly extolling the role of the impresario and in describing his planned entertainment. (The second part of this, depicting graphically the destruction of Carthage, was probably not intended as a reference to the War.)

The prompter Taupe (Bernard Fitch) who spent the whole performance asleep, appearing right at the end just before the Countess’ solo, to argue with La Roche the importance of his role. It is symptomatic of the performance that this duet was one of the high points. The Count was sung unremarkably by Morton Frank Larsen and the actress Clairon by Sarah Connolly. More usually seen in Handelian trouser roles, Connolly appeared strangely ill-at-ease in female attire, though she sang beautifully.

Light relief was provided by Italian singers (Olga Makarina and Barry Banks) and by the dancers Laura Feig (a cheeky provocative performance) and Erich Otto.

Renée Fleming sang the Countess in perfect Straussian vein, though on this occasion I felt she did not inhabit the role so completely as in some of her other appearances in HD. Maybe she was just not inspired by her suitors! At times she appeared to be playing to the camera rather than letting herself be observed by it.

This was a disappointing experience, whether the opera itself, the production or the performance. It was seen at the Sunday encore, having been heard ‘Live from the Met’ on BBC Radio3 the evening before when it sounded wonderful. I only confess that I had difficulty at times keeping awake because others to whom I have spoken admitted to the same problem. Maybe there was a lightness of touch, subtlety and elegance missing. It all seemed too contrived and mechanical despite the efforts of Andrew Davis, the conductor, old friend from his Welsh National Opera days.