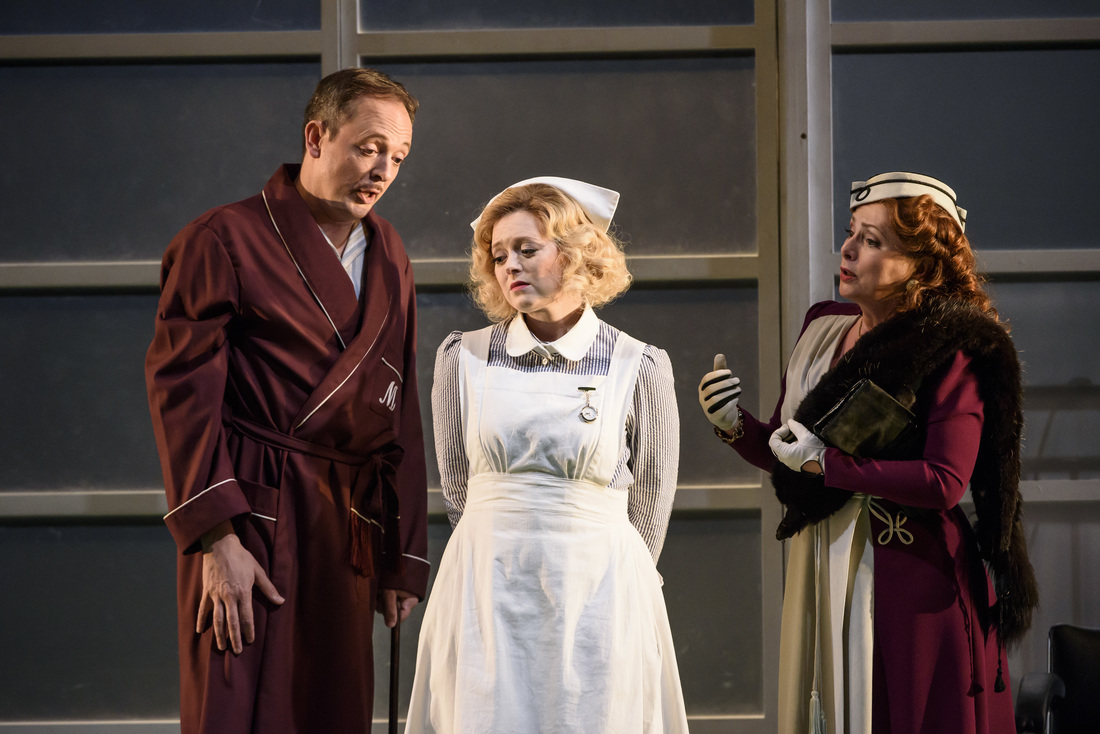 Orlando is one of Handel’s best and, in his time, most successful operas. Way ahead of its time, it breaks the rigid opera seria, da capo aria format with duets, trios and ensembles. The production, directed by up and coming Harry Fehr, was originally for Scottish Opera. It relates the story of the soldier hero driven crazy by his inability to choose between resuming his military career and his unrequited love for Angelica, whose life he has saved. Angelica loves Medoro, another soldier recovering from wounds, who is also loved by Dorinda. Presiding over all is the guru Zoroastro, who brings Orlando to his senses.
Complicated though they are, the plots of Handel’s operas are so universal that directors can set them in any time or place and still be true to the composer. Originally given a pastoral setting with Dorinda a shepherdess, in this production we are in a military hospital with Dorinda a nurse tending Orlando, bipolar, suffering post-traumatic stress disorder, and Medoro with a leg wound; Zoroastro is the head of the clinic. It is as if we are watching an episode of Holby City. The sets, designed by Yannis Threvons, constantly changing from wards to treatment rooms, offices and particularly the reception area bear an uncanny resemblance to Oxford’s Manor Hospital. A superfluous element is the occasional back-projection of video images presumably with some intended significance.
Within this staging the performance is stunning. Played as comedy, the ensemble acting has a Mozartian quality in delineating the relations between the characters. Two counter-tenors play Orlando and Medoro. Lawrence Zazzo takes the former role, created by the great castrato Seresino, and Robin Blaze the latter. Both perform effortlessly the vocal gymnastics demanded. The girls are played by WNO regulars Rebecca Evans (Angelica) and Fleur Wyn (Dorinda). The singing and acting of all was pure delight. In the third Act comedy comes close to tragedy when Orlando goes berserk attempting to kill Dorinda confusing her with the faithless Angelina, and setting the hospital on fire until subdued by Zoroastre with electric shock therapy after which he regains his sanity, dons his RAF uniform and prepares to set off for war.
A reduced orchestra with the addition of two theorboes attempts to produce a baroque sound under conductor Rinaldo Alessandrini. It provides adequate support for the singers while missing the precise dotted rhythms of Harry Bicket and The English Concert, whose concert version of Orlando can be heard in London and Birmingham on its world tour early next year.