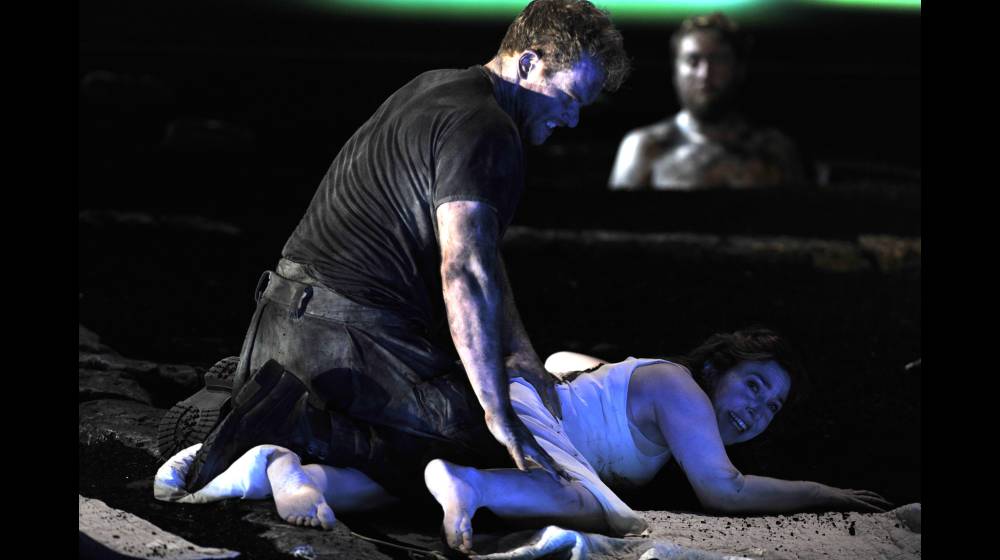 The Rape of Lucretia, Glyndebourne Festival 2015. Tarquinius (Duncan Rock) and Lucretia (Christine Rice). Photographer Robbie Jack
Our second trip to Glyndebourne, en famille, on 5 July was to see Benjamin Britten’s The Rape of Lucretia, his second opera written for a Glyndebourne first performance in 1946. This was an inevitable choice, given that I had never previously managed to see it staged but I remember well the first broadcast and subsequent recorded performances, associated with the voice of the great Kathleen Ferrier. On this occasion an added draw was the presence of two of today’s favourite singers, Kate Royal who performed the role of Female Chorus, and Christine Rice as Lucretia.

On this occasion the journey to within nine miles of Lewis was fast and uneventful but it then took an hour along the A27 to reach our destination. Fortunately we were able to warn the other half of the party who found an alternative route to arrive in time to secure the ideal picnic spot on the terrace. Otherwise a perfect evening.

As an aperitif, patrons were invited to attend a song recital by four young singers, members of the chorus sponsored by the Jerwood Young Artists scheme, all of whom were shadowing roles in Poliuto.  Mezzos Emma Kerr, Marta Fontanals-Simmons, tenor Gyula Rab and baritone Timothy Nelson were accompanied by an exceptionally fine pianist Bryan Wagorn, another Jerwood Young Artist. All had great voices and wonderful presence but it was the baritone who stood out, in spite of arriving late after being trapped on the A27. The high point of the recital was his performance of two of Hugo Wolf’s Goethe Lieder. It ended with a brilliant performance of an aria from La Cenerentola by Fontanals-Simmons reminding us of Christine Rice, the evening’s Lucretia, whose performance in Peter Hall’s Glyndebourne on Tour production remains for me the best ever.

The plot of The Rape of Lucretia, based on true events in 509 BC, opens with a group of Roman generals returning from unexpected leave of absence where they discovered that with one exception, Lucretia wife of Collatinus, their wives and girl- friends have been unfaithful. Their discussion prompts Tarquinius, a bachelor, to ride back to Rome to test Lucretia’s virtue. Abusing her hospitality he enters her bedroom and rapes her. Collatinus returns. Lucretia confesses. Although forgiven, she kills herself believing the sanctity of her marriage is destroyed. A male and a female chorus set the historical context and comment on the events from a Christian point of view.

The opera in this production raises many profound questions on the nature of conjugal relations throughout the ages. The ideal of the permanent union of one man and one woman has stood the test of time as a concept underlying our civilisation regardless of religion, culture, fashion and attempts to broaden the norms of behaviour. Feminists claim that this is because the record is written by men. They should ask themselves why this is so! The stresses and strains of married life constitute a central theme of art, literature and drama. Opera is full of virtuous wives who repulse men’s advances whether tempted or not: Penelope in Il Ritorno d’Ulisse in Patria, Lucretia, Tatiana in Eugene Onegin, Charlotte in Werther. These must be counted against the adulteresses who include Nedda in I Pagliacci, Isolde, Katya Kabanova, Marie in Wozzeck.

Glyndebourne have placed their revival of The Rape of Lucretia in the safe hands of actress and stage director Fiona Shaw who had originally staged it for Glyndebourne on Tour in 2013. Thank God we are spared an updating to more recent conflicts as in Poliuto, the audience being trusted to draw their own conclusions about the universality of the subject. The production opens with the raising of a tent within which, following a historical introduction from the chorus, the soldiers are discussing the fidelity of their spouses. The singing is tremendous. Apart from the Choruses, Kate Royal and Allan Clayton with clear enunciation, Duncan Rock stands out as a testosterone – charged Tarquinius. Matthew Rose sings Collatinus and Michael Sumuel, Junius. An innovation from the first production is to have the chorus involved in the action rather than standing dispassionate on each side of the stage. Shaw attempts unsuccessfully to explain this in a programme interview but it does not work. Matters are not helped by the lighting – so dim that the spectator cannot distinguish the singers and see what’s going on. It was only from the programme afterwards that we learnt that the opening is supposed to represent modern archaeologists discovering a Roman site.  (Many times recently I have had to complain about the lighting designer’s failure to grasp the basic principles of stage lighting.)

We move to Lucretia’s house, rooms depicted by chalk lines on the stage, setting the scene of calm domesticity with Lucretia performed by Christine Rice, with her servants Bianca and Lucia (Catherine Wyn-Rogers and Louise Alder) until interrupted by the arrival of Tarquinius seeking refreshment and a bed for the night. He is given a friendly welcome, Lucretia not being unaware of his charm.

After the long dinner interval the audience reassembled in a far more subdued mood than customary, for the rape, the return of Collatinus, and Lucretia’s suicide, graphically but not gratuitously depicted. Singing, acting and staging all contributed a deeply moving and thought-provoking climax.