Off with their heads!

Where has Anna Bolena been all my life? I was almost in complete ignorance of Donizetti’s operatic masterpiece before having the opportunity to see it thanks to the transmission from the New York Metropolitan Opera at the Phoenix Picturehouse on 16 October. I knew, of course, that it is one of the greatest operas of the bel canto era and the one that turned around the composer’s fortunes at its first performance in 1830. 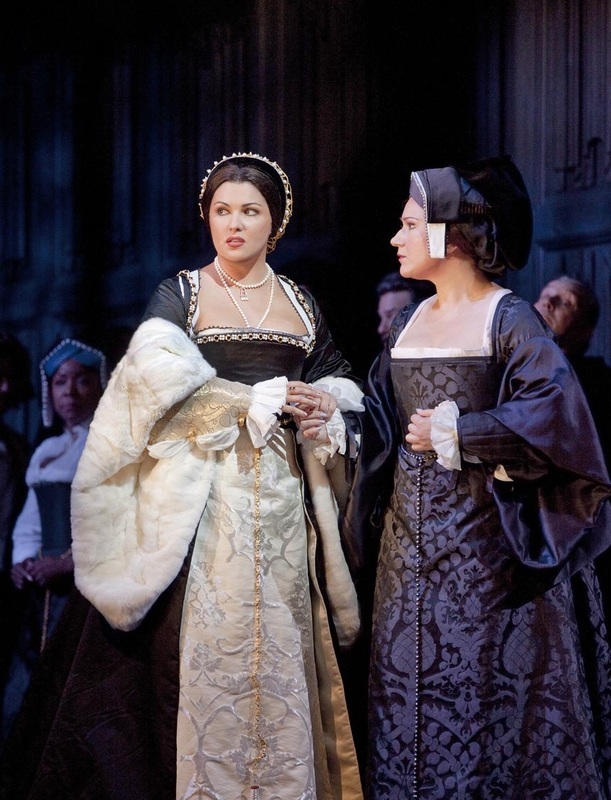 Anna Netrebko as Anna Bolena and Ekaterina Gubanova as Jane Seymour (Giovanna) in Donizetti’s “Anna Bolena”
Photo: Ken Howard/Metropolitan Opera
Rarely performed because of the demanding roles, not only of Anna and Giovanna (Jane) Seymour but also of the men in their lives and, like much opera of this genre, it is so dependent on the quality of the singing that is not worth reviving without the best soloists. In this new Met production, directed by David McVicar, the roles are played by two Russian singers at the height of their powers, soprano Anna Netrebko as Anna and mezzo Ekaterina Gubanova as Giovanna. With male voices of the same calibre the result was sensational.

Unlike many bel canto operas, Anna Bolena is tragedy, not melodrama. This production concentrates on the complex psychological interactions of the characters in a manner way ahead of its time, starting with a remarkable overture depicting in musical terms Anne’s pride, defiance and ultimate vulnerability. This was superbly performed under the baton of Marco Armiliato leaving us on the edges of our seats in anticipation of the rise of the curtain.

The story concerns the last days of the life of Anne Boleyn. Anne makes a confidante of her lady-in-waiting Jane Seymour, unaware that Jane is King Henry’s (Enrico) new amour. Jane is torn between her loyalty to the Queen and her love for the King, who is suspicious of her motives. The page Smeaton, enamoured of the queen, has a locket bearing her portrait which is the ultimate cause of her downfall.

Further arrivals are Anne’s brother and Lord Percy (Riccardo) a previous lover, who indiscreetly carries on trying to renew Anna’s love. All ends badly for Anna and most of the male characters and well for Giovanna. The opera ends operatically enough with Anna’s head on the block to the sound of the wedding bells for Enrico and Giovanna.

This was a performance to be experienced in the opera house, though the opportunity to see it in cinema transmission was not to be missed. We were on this occasion conscious of looking in on live action rather than being drawn into it as occasionally occurs (Thais and Eugene Onegin are particularly memorable in this respect).

Compensations were the superb sound quality, the ability to follow the argument through the sub-titles without moving the head and the appreciation of the detail of the costumes, created by Jenny Tiramani, which imitated designs of the period (complete with fastenings which inhibited in a genuine manner the movements of the performers - as we were told in the intermission interviews).

This was a realistic period production, totally faithful to the opera. On this occasion McVicar avoided the excursions into self-indulgence to which he is sometimes prone.All the male characters were well sung giving convincing portrayals, including mezzo Tamara Mumford as the ill-fated page, Smeaton. Outstanding was the young American tenor Stephen Costello as Riccardo, who sang with the purest bel canto voice. Keith Miller played the brother Rochefort and with Ildar Abdrasakov as Enrico (a surprisingly modest vocal role, though his presence hovers over the action). It was pointed out in intermission interview that everyone except Enrico and Giovanna loves Anna. Each faces execution at the end of the opera so that its climax is delayed through each having to have his swansong.

It is conventional to reserve special comment for the principal character. Here I find it impossible to separate the roles of Netrebko as Anna and Gubanova as Giovanna. Although Anna is the more demanding part, the two Russian ladies sang equally divinely and the opera is very much about contrasting the conflict between love and loyalty in Giovanna and the pride and anguish of Anna. Indeed the opening is more concerned with the former. In appearance they more resembled sisters than rivals.

This was a near perfect operatic experience but I have to register one disappointment for the cinema audience. I mention this only because some singers (notably Renée Fleming who was the evening’s host) have an uncanny ability to inhabit, before the camera, the roles they are performing. Netrebko (who, after a 2002 debut, first came to prominence to a wide audience through her appearance at the 2007 Last Night of the Proms) had to suppress her natural ebullience, revealed only in a pre-performance interview. All emotion was contained in her singing – her acting was monochrome, with unchanging facial expression, failing to convey the contrast in her moods and states of mind.

Likewise Gubanova did not project convincingly the lost battle between her conscience and her passionate nature. This was not helped by Enrico whose love-making mainly consisted of holding her head firmly between his two hands and singing straight into her face. Only Tamara Mumford as Smeaton had the knack of presenting to the camera a fully rounded character, at the same time singing her heart out.

This was an occasion on which the cinema audience had the good fortune to be able to eavesdrop on an outstanding, old-fashioned traditional grand-operatic performance, with (to the uninitiated) all the conventions of grand opera: two mature Russian divas singing two English Tudor roses, in the Italian language, set to glorious music. It was marvellous!