From the front row of the Phoenix Picturehouse we expected to find ourselves, on curtain-up, in the Swiss Alpine village where the opera is set. Instead we were in a Manhattan warehouse in use as a rehearsal room. The cast, in everyday clothes, and the production team enter and start doing their thing. Our first reaction, that this is an economy measure, designed to save the cost of costumes and scenery, is only fully dispelled with the finale when we suddenly discover ourselves in the village setting with the whole cast in traditional alpine costume – a tour de force which brings us back at the end to operatic reality! Was this a monstrous and impertinent violation of the spirit of bel canto opera as a vehicle for singers or a brilliantly imaginative attempt to give modern relevance and psychological depth for today’s audiences? 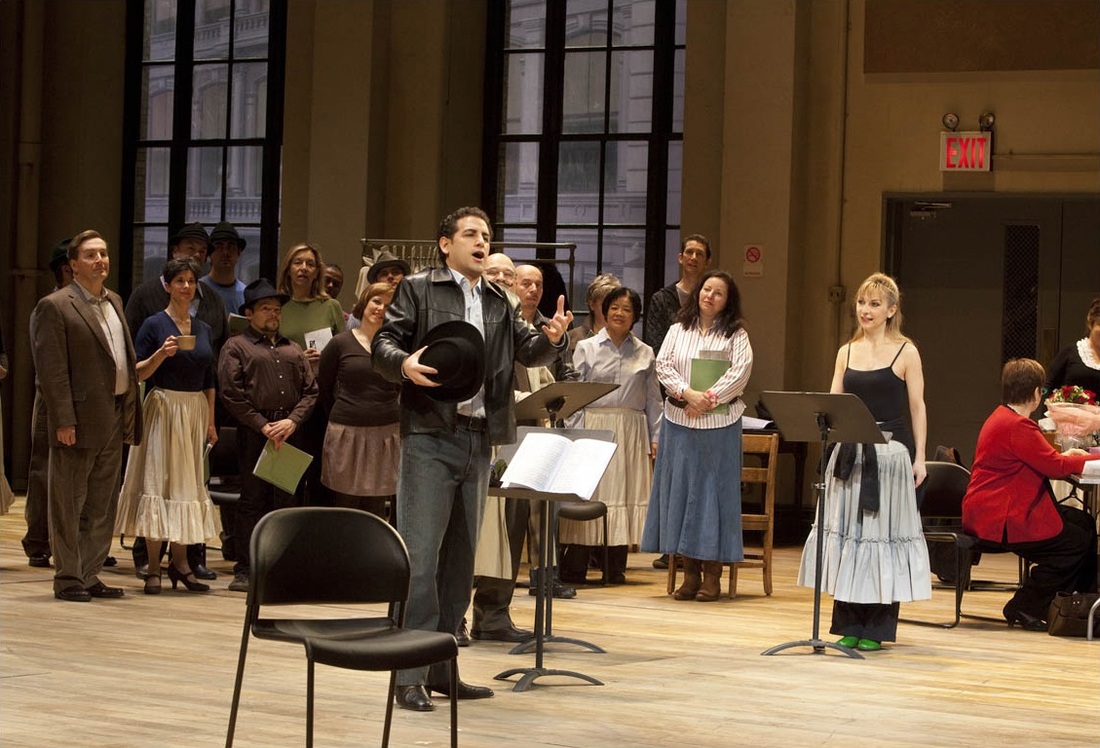 Juan Diego Florez as Elvino and Natalie Dessay as Amina in Bellini’s “La Somnambula”
Photo: Ken Howard/Metropolitan Opera
Much to my surprise, I found it much more the second than the first. The antics on the stage were not out of keeping with the spirit of Bellini’s opera, the set pieces, the sleepwalking (including even the use of the aisle in the auditorium, though I understand how this could annoy some) and the scenes of love and jealousy could be appreciated without obtrusive interference from the direction and one was not forced to ponder any significance of the rest.

My grievance is that this should have been advertised as 'adapted’ rather than ‘directed’ by Mary Zimmerman to warn potential audiences. Without such warning, first-night boos are merited. (To be fair, the cinema hand-out did explain this but in such a small print as to make it unreadable.)

Dessay and Flórez, whom we were lucky enough to see together live at the ROH in La Fille de Regiment, were again a perfectly matched partnership. Dessay has a wonderful voice. While perhaps not matching up to the greatest interpreters of the role – we admire the accuracy and beauty of the sound, particularly in her upper register – an ultimate tingle-factor is absent. However she makes up for this by her personality. She has said herself, in interview, that she is primarily a performer and not a singer. She displays an uncanny ability to inhabit the character of the role she is playing (whether ironing soldiers’ shirts or somnambulating). This ability, which she shares with Renée Fleming, makes these two the leading prima donnas of this new medium of live cinema transmissions.

Flórez, too, has enhanced his claim to be the tenor of our time, by his appearances live in HD, thanks to the miracles of modern day audio technology. His assuming manner enhances the appeal of his marvellous voice and our admiration at his ability to approach and sustain the highest notes without apparent effort. He represents character through his voice rather than dramatic skills but this is sufficient. On this occasion all he is required to do is to engage in extended embraces with his lady and be able to bear her weight.

A third performer who commanded attention, holding his own against soprano and tenor was the bass Michele Pertusi, singing the Count Rodolfo. He also, inhabited his role, coming over well in close-up and also with attention-grabbing voice. Jennifer Black who played the devious Lisa not without charm, and Jane Bunnell, the mill owner Teresa, also contributed strongly to this dream cast.

This time the audio-visual quality was well-nigh perfect; only during the curtain-call credits did the signal fail so we missed the opportunity to join the standing ovation in the Opera House.