Of many operas derived from Tasso’s sixteenth- century verse epic Gerusalemme liberate telling the story of the crusader Rinaldo and the enchantress Armida, the version by Rossini receives surprisingly few entries in the extensive collection of opera dictionaries on which I rely for my homework! Most surprising it is not among the 780 operas listed in Phaidon Book of the Opera, my usual first port of call. However, it does appear among the thirteen mentioned in the Bloomsbury Dictionary of Opera and Operetta which is the best one-volume opera dictionary, packed with information, not least on the literary sources of the plots. 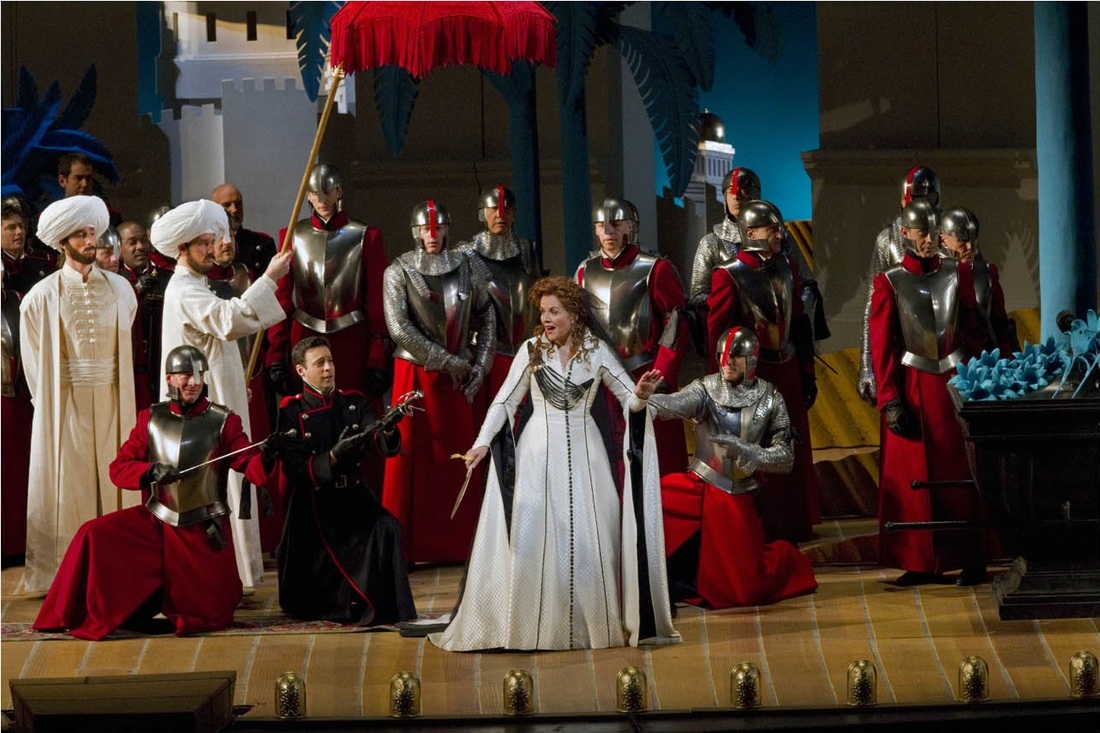 Renee Fleming in the title role of Rossini’s “Armida”
Photo: Ken Howard/Metropolitan Opera
The simple story relates to the mutual infatuation of Rinaldo, ensnared by the charms of Armida, who constructs for him a pleasure palace where they dally until two of Rinaldo’s colleagues come to his rescue and recall him to his sense of duty, causing him to break the spell. In a rage Armida destroys the palace, in a scene recalling those other dumped operatic ladies Dido and Ariadne.

Of the many versions, best known are those of Lully (1686), Handel (1711) and Gluck (1777). Lully and Gluck share the same libretto by Philippe Quinault. Gluck set out provocatively and not successfully, to demonstrate the superiority of his reformed opera. Handel’s Rinaldo, was the first the composer wrote for London and is one of his greatest. It introduces two other characters, Rinaldo’s girlfriend Alminera and a pagan king Argante who fancies her. In a happy ending Alminera reclaims Rinaldo while Armida and Argante hit it off and convert to Christianity.

Rossini’s opera is a bit of an oddity. A late blossoming of opera seria with coloratura decoration, it shares with that genre a dependence on ballet and spectacle. Its cast is unbalanced with one soprano, Armida, no less than six tenor roles (in this production with five singers) and two basses and two mimed figures of Love and Revenge and a principal dancer representing Rinaldo in the ballet.

The production is by Mary Zimmerman, remembered for her imaginative modern dress adaptation of La Sonnambula. This time the setting is baroque, with the ubiquitous figure of Love, charmingly mimed by the young dancer Teele Ude, holding up scene-setting placards. She is complemented by an ominous Revenge (Isaac Scranton) who haunts the darker scenes.

The overture begins with brilliant coloratura passages for horns and bassoons, which set the style of the opera as an odd mixture of bel canto and the baroque. The first act opens with the first tenor, John Osborn, as the crusaders’ commander Goffredo with a full rich voice – we would like to have heard more of him. Then Armida (Renée Fleming) enters, disguised as a damsel in distress seeking help against her evil uncle Idraote (sung by Peter Volpe, one of the basses).

The knights vie to join a rescue party under Rinaldo (Lawrence Brownlee) but the number of tenors is reduced by one when he kills the jealous Gernando (Barry Banks), invoking the wrath of his colleagues. Rinaldo flees with Armida under cover of her conjured-up storm; this is of much lower force than that in the composer’s La Cenerentola and other great operatic storms.

The second act opens with the construction of an illusory pleasure palace by a group of assorted demonic creatures under the direction of a Prince of Hell, Astarotte (evilly performed by the other bass Keith Miller). Rinaldo is enraptured by Armida and the entertainment provided by singers, dancers and spectacle, completely oblivious of his crusading duty.

In Act III two more tenors turn up, as the knights Carlo and Umbardo, to plead with and to rescue Rinaldo in the musically most complex and intense section of the opera. The roles are performed by a resurrected Barry Banks and Kobie van Rensberg, forming with Brownlee a perfectly blended three-tenor trio. Armida in a dramatic concluding aria is torn between Love and Revenge, choosing Revenge and destroying the palace.

The opera contained some good numbers, enjoyable at the time but little to remain in the memory. It was not Rossini at his best. Brownlee was impressive throughout in his demanding role. Fleming made what she could of a role not really suited to either her dramatic or vocal style. As she admitted in an intermission interview, she is most at home in Richard Strauss and least in coloratura roles. On this occasion she did not get under the skin of the character as she usually does. I treasure above all in his respect her remarkable performances as Tatiana and Thaïs, seen live in HD. She was best in Armida’s first appearance, disguised as a noblewoman, but she is just too nice a lady to convince as a wicked coloratura playing a temptress.

The conductor was Riccardo Frizza, a convincing Rossinian. The spectacular choreography was due to Graciela Daniele, enhanced for the cinema audience by TV director Gary Halverson.