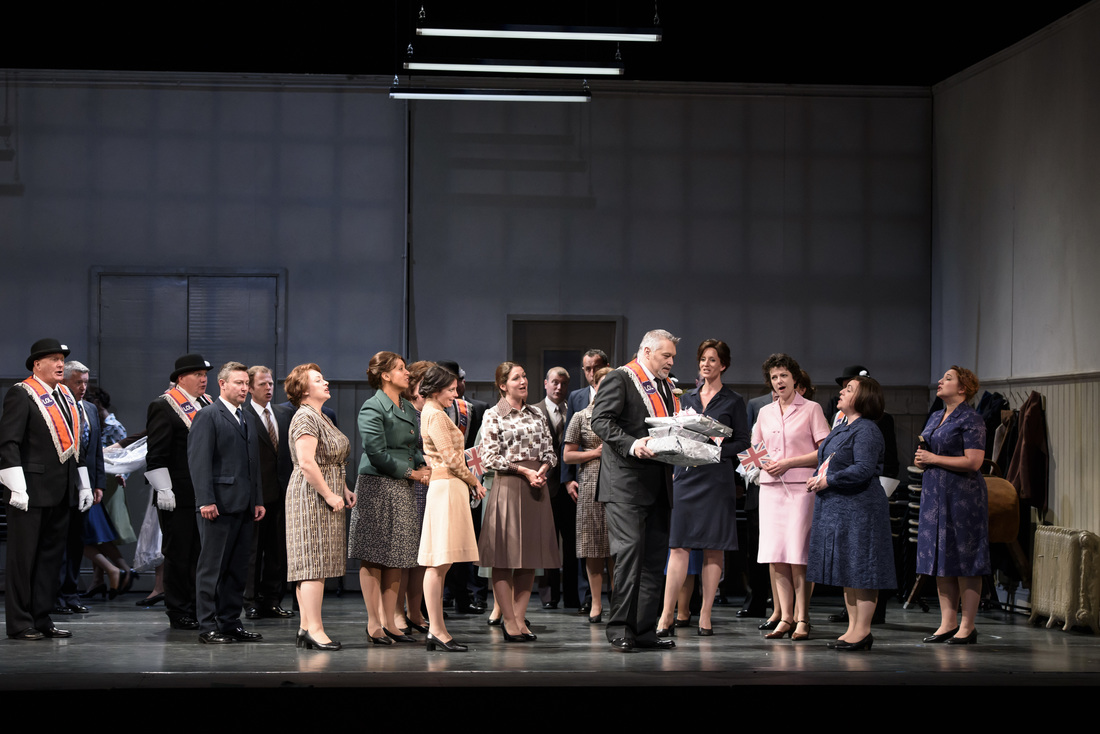 WNO I puritani. David Kempster (Riccardo Forth) and WNO Chorus. Photo Credit Bill Cooper 20.jp
Bellini’s 1835 opera I Puritani, based indirectly on Walter Scott is set in 17th century Plymouth. Elvira, daughter of Puritan commander Valton has received special dispensation to marry Catholic Arturo Talbot with safe passage to leave. On their wedding day, Arturo uses the passage to aid Queen Henrietta (Enrichetta), widow of King Charles I, to escape custody, disguised in Elvira’s wedding outfit. This, not surprisingly drives Elvira mad. She spends the rest of Act I, the whole of Act II and most of Act Iii in a state of madness, until just before the end when Arturo returns. They are reunited, Elvira is restored to sanity and the opera ends happily when the Puritans declare a pardon for all Royalists.
Welsh National Opera thinks it knows better: the opera is set in twentieth century Northern Ireland. Enrichetta is a suspected spy condemned to death. The reprieve comes too late to save Arturo from having his throat cut. The result is what has unfortunately become the hallmark of many recent WNO productions – dingy sets, shabby costumes, dim lighting. The opera just does not fit the Northern Ireland situation. Why can’t the management engage directors dedicated to supporting what is in the score and the drama and not trying to impose their own agenda? What has happened to the likes of Peter Stein, André Serban (Serban directed a wonderful, Puritani in 1982 with Murphy, O’Neill and Gwynne), Katie Mitchell or even Leiser and Caurier?
The Company deserves better. Musically and vocally the performance was superb. Under Carlo Rizzi, recently announced as Conductor Emeritus, the orchestra was at its best notably with splendid playing from the brass section, and the chorus was in excellent form. Like all Bellini, I Puritani demands singers, particularly sopranos and tenors, of the highest calibre. We were very fortunate that the indisposed Barry Banks could be replaced at short notice by Alessandro Luciano in the role of Arturo. Luciano is a true bel canto tenor who confidently attacked all the highest notes in thrilling fashion and with fair success. Linda Richardson, Elvira, proves to have the power and stamina to sustain almost three hours of Bellini madness. The remainder of the cast was equally strong. Riccardo, Arturo’s Protestant rival for Elvira’s hand was played by David Kempster. Impressive was the bass voice of Aidan Smith as the Protestant commander.