Attendance at the 9th Oxford Lieder Festival, to be reported in the next issue, was interrupted for one day for Boris Godunov, the second of the season’s transmissions from the New York Met, seen at the Sunday repeat. We were grateful that we had not secured tickets for the live transmission which clashed with the second half of the complete Mörike Lieder of Hugo Wolf. Seen only once previously in a heavily truncated version by Welsh National Opera in 1998 with Willard White, the opportunity to experience a full version of this long opera, with a largely Russian cast under the baton of Valery Gergiev, was not to be missed. 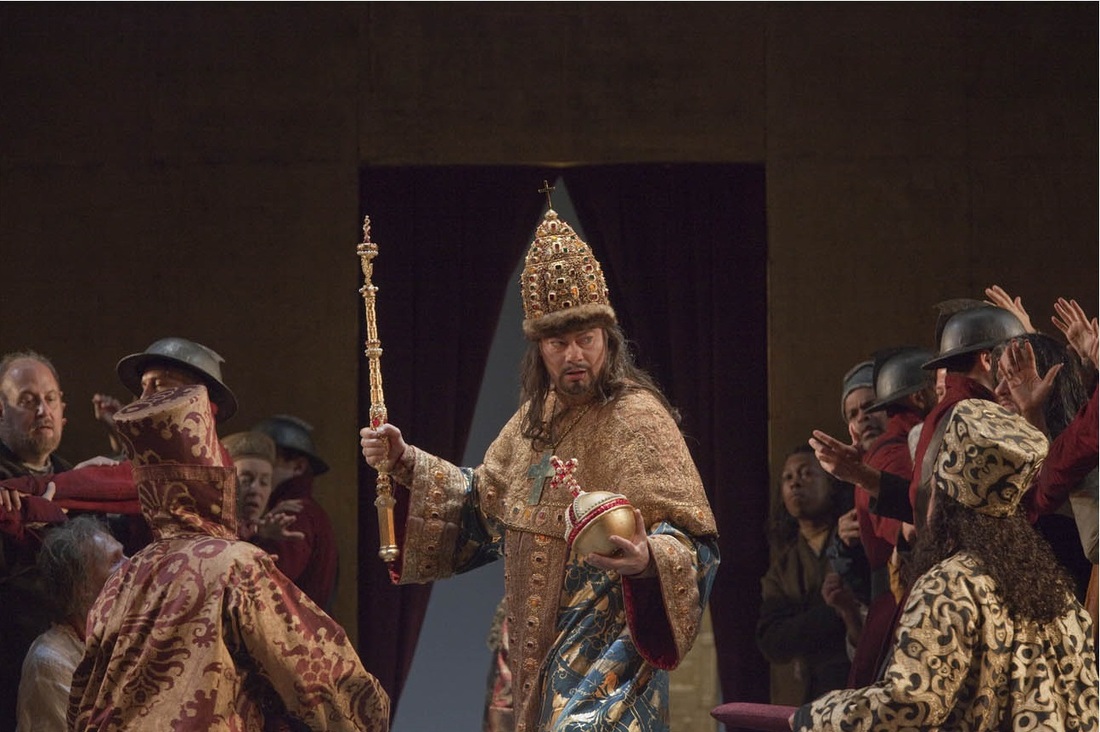 Rene Pape in the title role of Mussorgsky's "Boris Godunov"
Photo:Ken Howard/Metropolitan Opera
The opera, based on Alexander Pushkin’s version of Russian history, tells the story of Tsar Boris’ remorseful decline and death over his guilt for the murder of Dimitri, the previous heir and his succession by a false Dimitri in the shape of Grigori, a novice under the instruction of Pimen, a chronicler; Grigori has taken refuge at the Polish court, where the princess Marina encourages his ambition, egged on by a Jesuit Rangoni whose aim is to convert Russia to Catholicism.

This is a great rambling flawed masterpiece of an opera of three distinct elements. The first element comprises the Prologue (1598) and the final Act IV (1605), dominated by the chorus, representing the Russian people under the control of the police, initially persuading Boris to accept the crown and finally turning on the old regime to welcome the false Dmitri. The second element consists of the context-setting Act 1 (1603), firstly showing Grigory learning of the truth about Dmitri from Pimen followed by his escape from the police into Lithuania. Thirdly, Acts II and III follow Boris’ increasing sense of guilt and anguish and then events in Poland where Grigory gains in confidence as the Pretender under the seductive influence of Marina.

In the Met production by Stephen Wadsworth, the chorus is augmented by forty to a strength of one hundred and twenty. Dressed as the Russian populace they look far too well fed. This represents a fatal flaw with the cinematic presentation of TV Director Brian Large. This is an opera with operatic conventions; to have the camera exploring the faces and detail of incident in the crowd does not create an illusion but distracts from what matters: the singing of the chorus (albeit missing a genuine Russian sound). The cinema audience is there to experience the opera, not to see a second rate movie musical. The beginning of Act I is not interesting, the second scene at the Lithuanian border is played with plodding gallows humour. By its end I was beginning to be thoroughly bored.

But then, in Act II, with the singing of René Pape as Boris in the first of three great monologues, beginning to give way to terror, the opera comes to life. Pape’s singing and acting, even to the camera, are superb; he transforms himself into a Russian Tsar and we share Boris’ anguish and grief. But more is to come in the singing in Act III, first with a scene between the Marina of Ekaterina Semenchuk and the Jesuit Rangoni (Evgeny Nikitin) where he bends her to his will, followed by the scene of seduction between Marina and Grigory (Aleksandrs Antonenko).

This Act is brilliantly sung and acted against a background of the Polish Court, given a dreamlike quality by the elegant Polish ladies being dressed two hundred years ahead of the fashion of 1600.

The opera ends with a Holy Fool ‘lamenting Russia’s bleak uncertain future’. In this production this character appears throughout, weaving his way in and out of the crowd, presumably for symbolic purpose.

There was much to enjoy in this production but this was one occasion on which one longed to be present in the auditorium, listening to some glorious singing and orchestral playing, undistracted by unsubtle HD editing.