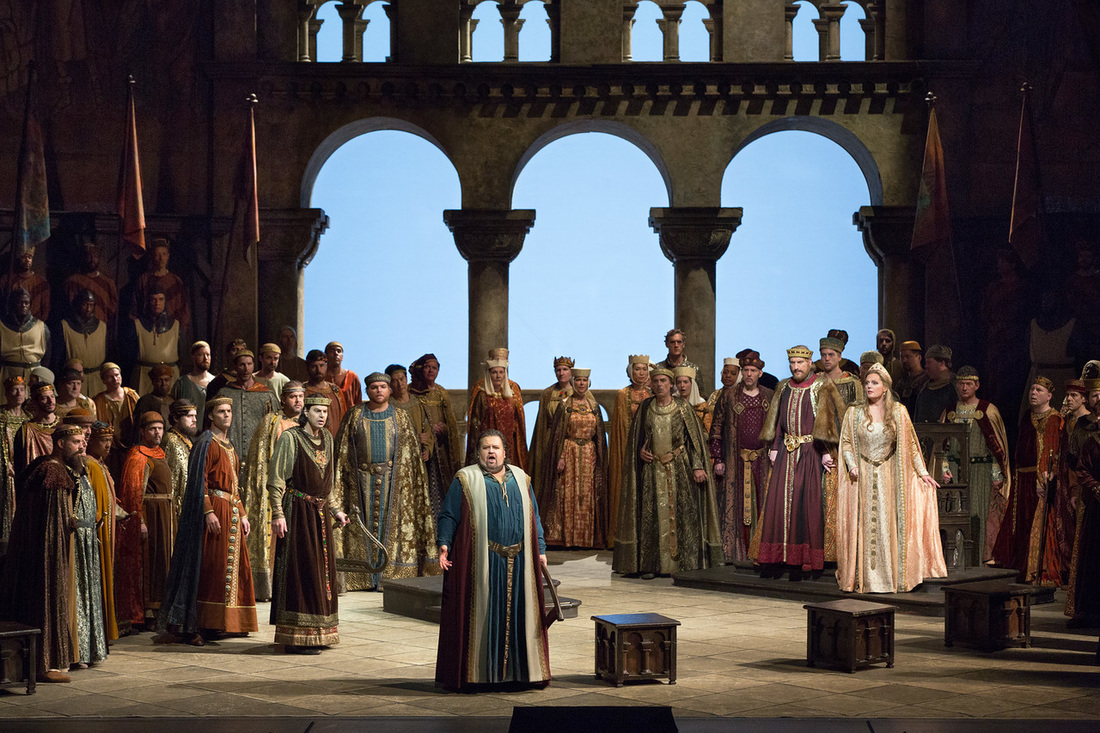 TanPeter Mattei as Wolfram, Johan Botha in the title role, Günther Groissböck as Landgraf Hermann and Eva-Maria Westbroek as Elisabeth in Wagner's Tannhäuser. Photo by Marty Sohl/Metropolitan Opera.nhauser_
This live high definition transmission was of a revival of Otto Schenk’s 1973 production of Tannhäuser. Magnificently played and sung, it came over, nevertheless, as almost a parody of what grand opera used to be. The characters, larger than life, for the most part looked like opera singers rather than inhabiting their roles; the elaborate traditional sets were in sharp contrast to the economy-driven Spartan scenery of today (with occasional wasteful extravagances). Likewise, the depiction of profane versus romantic love avoided all trace of the sexual explicitness to which modern performers are subjected. It was fun! (1973 was the year I saw the opera at Covent Garden, courtesy of British Railways’ long defunct Music Line, with W Kassel in the title role, Josephine Veasey as Venus and Jesse Norman Elizabeth with Colin Davis conducting.)
The production has received only thirty –two performances in the forty-two years of its existence. In an intermission interview the present wardrobe mistress explained how the original costume designs of Patricia Zipprodt had been lovingly preserved and adapted to the shapes and sizes of successive casts.
The story of the opera conflates two tales of thirteenth century German. In one, the hero tears himself away from the pleasures of Venus but can only receive forgiveness by going on a pilgrimage to Rome. But he is refused absolution until such time as a pilgrim’s staff bursts into leaf. This it does only on the intercession of his dead fiancé. In the other the hero competes for the hand of his beloved Elizabeth in a song contest with a rival. In the opera, which Wagner originally entitled Der Venusberg until it was pointed out to him that this had more specific connotations, Tannhäuser gets carried away in the song contest with his rival Wolfram, extolling the pleasures of Venus. Ostracised, he goes on the pilgrimage but, disappointed, he is on his way home tempted back to Venus. This is such a shock to Elisabeth that she passes away, enabling the redemptive miracle.
The performance was conducted by James Levine, frail after his absence but fully in command of the proceedings. He set a slow, portentous pace for the opening march, which was followed a lengthy ballet depicting a sanitised bacchanal on the pleasures of the Venusberg so that it was some time before we were introduced to the singers (too long for a gentleman in the row behind me who spent much of the time snoring).We meet Johan Botha in the title role and Michelle DeYoung (Venus) in symbolic embrace, both looking and sounding like old-fashioned opera stars, he wanting to leave, she reluctant to release him (DeYoung believing she had genuine feelings for him). Both appeared and sang as opera stars of a bygone age. Thus, Tannhäuser was corpulent rather than athletic, Venus voluptuous rather than sexy. Before the scene change to the Wartberg Hall of Song we heard the shepherd’s song beautifully performed by soprano Ying Fang. Elisabeth, played by Eva-Maria Westbroek, now making her name as and looking the part of a Wgnerian soprano following her sensational creation of the title role in Anna Nichole and an acclaimed Sieglinde in The Met’s ill-conceived staging but musically great Ring cycle. Only Peter Mattei of the principals, playing Wolfram, with his slim and upright appearance looked out of place on the Wagnerian stage. He made up for this in his divine rendering of the hymn which is known beyond the world of opera as ‘Oh star of Eve’ sung in an attempt to console Elisabeth.
The remaining cast all made great contributions to the whole, though all dressed the same it was difficult to distinguish individuals. The elaborate traditional sets, designed by Günther Schneider-Siemssen showed none of the tattiness often associate with long-standing productions. Where have they been stored over the last forty years? Wartberg’s Hall of Song of Act II with a gallery of around ten trumpeters impressed particularly.
This production of Tannhäuser awakened feelings of nostalgia for production styles of the past. But things have moved on and now it must be regarded as a reminder of what we used to expect.