Hector Berlioz is a composer of vast wide-ranging romantic imagination. His theme is the humanity of the individual pitted against the vast forces of nature, war and peace, good and evil. His music covers pomp and circumstance down to the intimacies of sacred and profane love. This is illustrated in his purely orchestral works Harold en Italie, Symphonie Fantastique, in his dramatic choral works, Roméo et Juliette, L’Enfance du Christ and his masterpiece, the opera Les Troyens. Nowhere is his range better demonstrated than in his opéra de concert, La Damnation de Faust. Although composed for concert performance, the imagery is so vivid that it calls for the addition of a visual dimension. 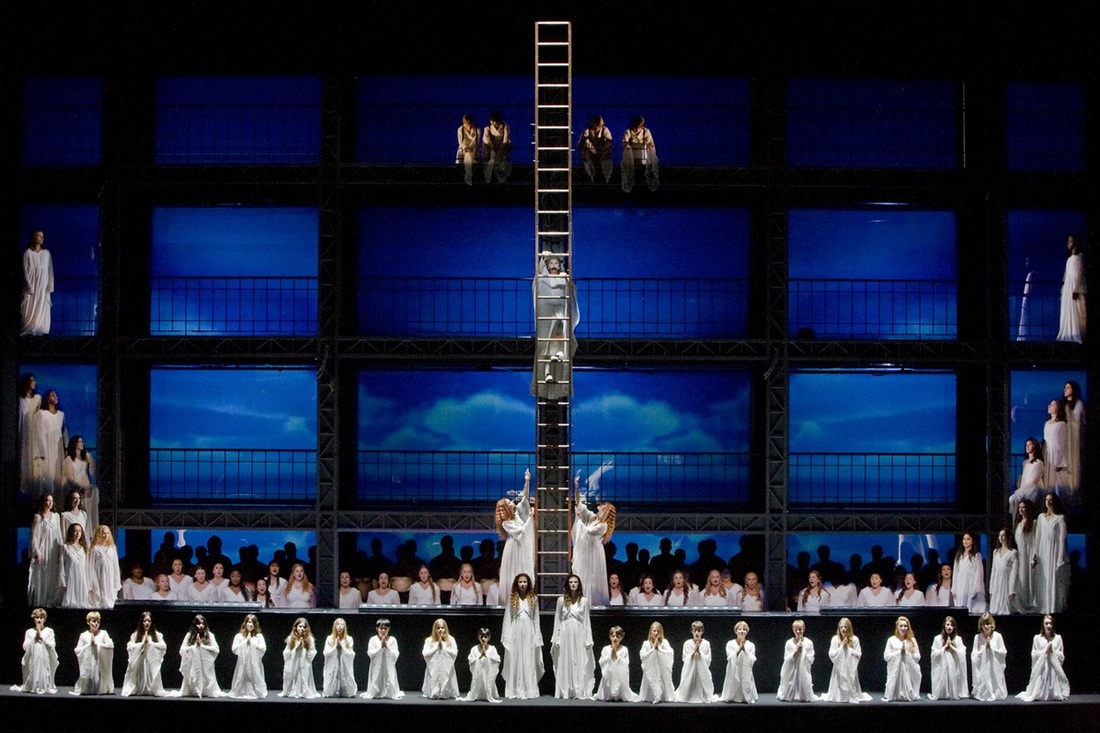 A Scene from Epilogue of Berlioz’s “La Damnation de Faust”
Photo: Ken Howard/Metropolitan Opera
That is what is attempted in this production which uses interactive state-of-the-art video projection techniques superimposed on the real singers to provide an integrated audio-visual experience that is equally valid in the auditorium of the Met or in the movie theatre, with the difference that the Met audience probably finds it easier to distinguish the ‘real’ from the video, almost impossible in the cinema. The director is Robert Lepage, whose creative collaborations of this nature have included La Cirque du Soleil and an earlier version of Faust.

The set is a facade of galleries on several levels in a lattice filling the vast proscenium of the Met within which the singers and images and multiple images of peasants, soldiers, students and eventually horsemen perform in a manner matching the exuberance, drama and tenderness of the music. But it got off to a bad start.

La Damnation de Faust consists of twenty-one scenes loosely based by the composer on a French translation of Goethe’s Tragödie. Berlioz sets the first scene on the plains of Hungary as an excuse to incorporate the Rákóczy March previously performed there to great acclaim. This was given a light-weight performance accompanied by soldiers marching backwards. It got worse.

In the next scene Faust is saved from suicide by the sound of the Easter Hymn. To accompany this we got we got multiple images of the Crucifixion, an inexcusable solecism. Even worse, these scenes called to mind the end of Monty Python’s Life of Brian, with the ditty Always look on the bright side of life – appropriate words maybe, if not the music!

It took the rest of the first half of the performance to regain my concentration after these ghastly misjudgements as Berlioz reasserted himself in the otherwise superb musical interpretation under James Levine. Remarkably, the scenography also recovered, providing great visual support for the drinking songs (the rat and the flea) and the ballet depicting Faust’s dream of Marguerite which concludes Part II.

During the interval we were treated to interviews with the principals Marcello Giordani (Faust), John Relyea (Méphistophélès) and Susan Graham (Marguerite), all making the point that they were unaware of the video technology behind them while praising the director with Graham also drawing attention to the ladder she has to climb during her apotheosis.

All sang well (as did Patrick Carlizzi as the student Brander) though Faust not without some strain in his upper register. Graham sang with great beauty, simplicity and innocence – in Berlioz’ version she is condemned for accidentally overdosing her mother with sleeping draught so the lovers would not disturb her. Faust’s descent to hell is depicted with images of horse-riders, while the drama is carried by the music.

The final scene, Le Ciel and Apothéose de Marguerite with its choir of celestial spirits while she mounts the ladder the full height of the set, was found too kitschy by some; to me it was an appropriate conclusion, though the cinema audience could have been spared close-ups of the singers.

Despite my carping, I regard this production as a landmark in the simultaneous visualisation of music drama in cinema and theatre. We await eagerly but not without apprehension Lepage’s promised production of The Ring.